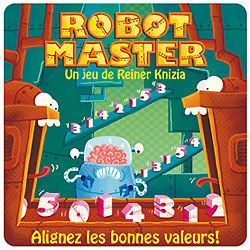 A game of strategical placement as players have a deck of 36 robots with six cards each of values 0 to 5, and they want to maximize the value of their rows or columns of robots on a 5x5 grid. The value of a row is the sum of the robots in it, except that a pair of identical robots in a row is worth ten times the face value of a single robot (two 3s gives you 30 points, but of course two 0s is still worthless); place three robots of the same type in a row, however, and they're worth 100 points no matter which type they are. The goal isn't to max out your score, but rather to beat your opponent as whoever has the lowest-valued row or column at game's end loses. Since 11 of the cards don't come into play, you have to play the odds on which robots will shuffle your way. A reworking of Dragon Master. Main differences: in Dragon Master you had only 5 cards in hand; you had only 30 cards so just 5 were out of the game and instead of the ten times/100 points score rows were simply evaluated based on the number of similar cards in them. Robot Master also provides rules for 1 and 4 players. Online Play Jijbent.nl (turn-based, Dutch) YourTurnMyTurn.com (English - turn based) Mindgames.com (solitaire version)