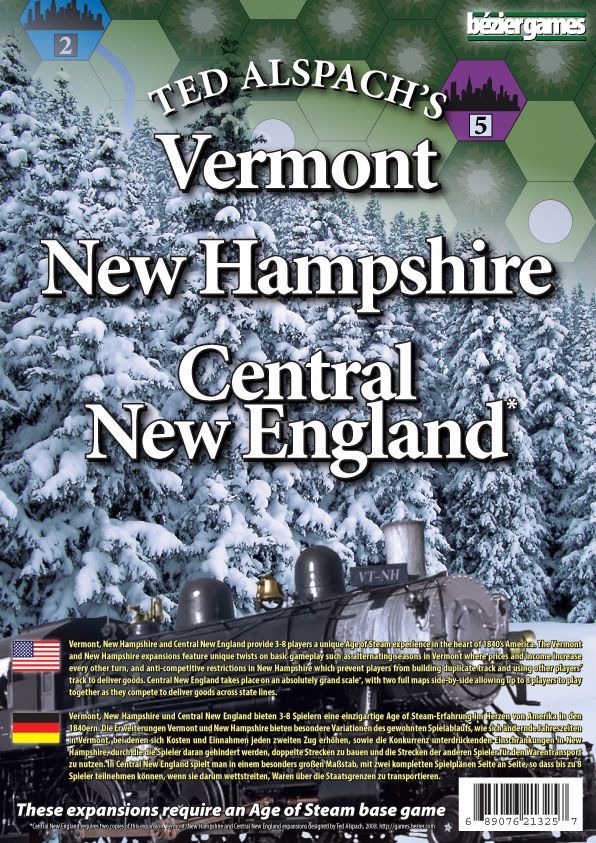 This full color, mounted-on-gameboard Age of Steam expansion contains two maps with three different expansions containing unique twists on Age of Steam, including a double-map expansion with comprehensive modifications and the ability to play up to 8 players in a single game. The maps are compatible with both Age of Steam and Steam. Vermont Takes place in the rural forests of Vermont, where the rugged terrain and drastic seasonal changes make railroad building very expensive...but also very lucrative. This map features Seasonal Changes: Every other turn (Winter), track is more expensive. On those turns, however, you'll get a bonus income for each delivery you make. It also feature Unused Action Bonus: Any unused actions receive money, which keeps piling up until someone uses that action. New Hampshire Right next door to Vermont, this side of the expansion features strict anti-competitive measures that ensure there's no collusion amongst players. This map features Unique Track Builds: Track builds can not be duplicated; once a player has built a section of track between two locations, no one else can build that same connection. It also features No Track Sharing: Players must deliver goods across their own track only. Central New England The biggest expansion ever created for Age of Steam, allowing up to eight players simultaneously and using all the rules from Vermont and New Hampshire in addition to a few new rules specifically for this combination map, including Crossing State Lines: where goods must be delivered across state lines and Smuggle: an action which allows players to secretly deliver within the same state. Since the expansion is a single double-sided board, two copies are needed to play Central New England.