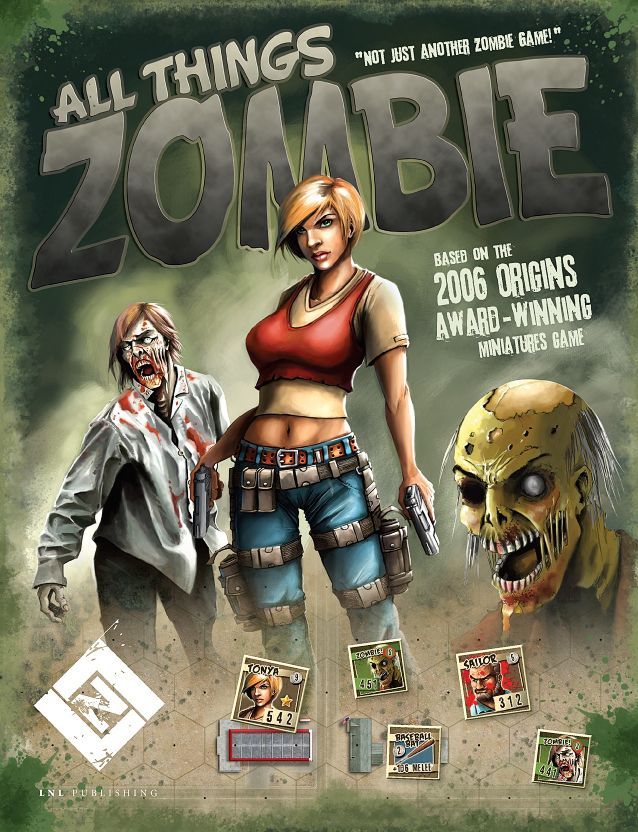 THIS GAME HAS BEEN DISCONTINUED. All Things Zombie is a board game based on designed by Ed Teixeira of Two Hour Wargames and winner of the Origins 2005 Miniatures game of the year. Gamers play as survivors trying to survive in a world populated with zombies, fighting intensely satisfying tactical battles as they roam the devastated land. As the minis game designer, Ed Teixeira says, "It's all about real life in an unreal world." Featuring amazing art, and a detailed, yet accessible, design, All Things Zombie is a gamers' dream. All Things Zombie will appeal to both strategy gamers and RPGers alike. Whether searching a police station for guns and ammo, gunning down hordes of zombies, or blasting through a running gun battle with other not-so-nice-survivors, All Things Zombie will keep you on the edge of your seat. All Things Zombie can be played solo, cooperatively, or competitively with everyone against each other. Whichever way you choose to play the game the zombies are run by the game mechanics and do not need to be run by one player. The game includes six scenarios as well as a campaign game that insures a high degree of re-playability. Easy to learn but difficult to master All Things Zombie will provide the gamer with many hours of fun. This edition is no longer available, the new edition is now available and titled All Things Zombies Reloaded. New Edition In the Series: All Things Zombie: Reloaded