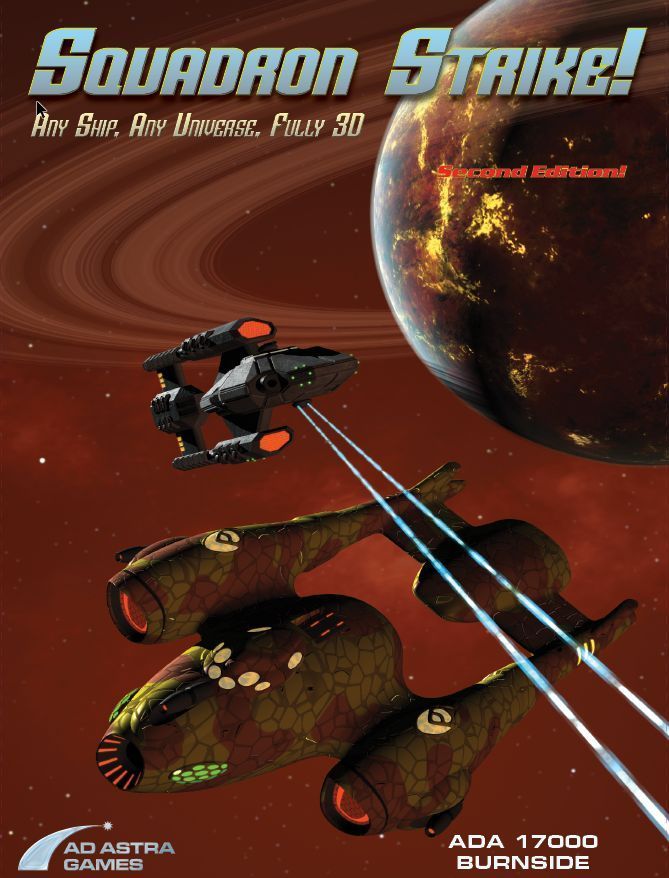 "Building off of the streamlined 3-D movement engine of Saganami Island Tactical Simulator, 2nd Edition, Squadron Strike lets you build any ship, from any setting, in full 3-D glory—and then pit them against each other, in titanic battles for the fate of galaxies." "Squadron Strike takes between 5 and 10 minutes per turn with 6 ships per side, and combines fast play with more tactical depth and scalable detail than any other 'construction ready' space combat game. It’s suitable for Ages 12 and up." "In Squadron Strike, ships move in one of three movement modes, named for the number of Newton’s Laws being obeyed; with these options you’re not stuck with whatever movement mode the game designer liked - you can pick the one that works best for the setting you’re trying to run in. You even have optional fuel rules (for both interstellar and tactical movement) to simulate the setting or TV series to whatever degree you like. You decide what reality level is appropriate for your level of fun." "You can design nearly everything in the game, from missiles, to beams, to fighters, to torpedoes. An original setting includes pre-built ships and weapons for people who don’t want to get deeply into the customization process, but if you want it, you have complete control." "Automated tools do complete SSD generation for you, in Excel format, or with higher end features via web applications." "Squadron Strike comes with a complete, integrated campaign system, including web apps that automatically generate campaign maps, victory decks, and system maps. Just enter the campaign turn in the web app and the positions of the planets on the system map update automatically!" "The boxed game will have two map sheets, a bag of tilt blocks, two bags of stacking tiles, box miniature sheets, a rulebook, an SSD book and a setting book. The ship design tools are available as a free download in Excel; the web applications (including a nicer ship design tool set, and campaign support) are behind a subscriber login."