After the Flood - Universal Statistics 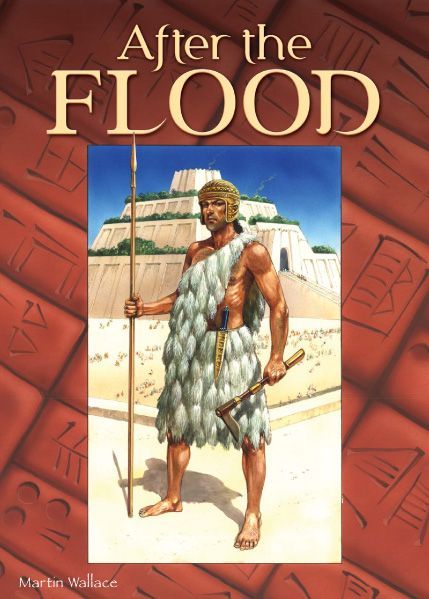 Description courtesy of BoardgameNews.com After the Flood – a three-player game that’s set in Sumeria, with players using regional resources to trade for goods not produced in the area while also building short-lived empires for long-lasting victory points. “Certain mechanisms were created with three players in mind,” says Wallace. “You score an empire, then remove it, so you can try to maximize points on your turn without leaving yourself in a position to get hit on following turns.” This design sidesteps the problem of a third player winning a game due to fights to the death by players 1 and 2, but that bug becomes a feature in another part of the game. Competition among the players for goods and army strength is relative rather than linear; having twice as many dudes collecting resources won’t net you twice the number of goods, so getting into an arms race with one opponent might hurt the two of you together and advantage the third player who can spend resources on better things. Controlling different cities gives you different bonuses, with the bonus being based on the history of the city itself: Sippar lets you trade more, Babylon counts for additional armies, and so forth. Combat in the game is dice-based to avoid deterministic battles in which you can guarantee victory simply by piling up more troops, although size does have its advantages. Game Summary Like Wallace's other games Liberté and Byzantium, players don't represent a particular faction/nation. Instead, the game covers a long period of history (~1500 years in this case) and players temporarily control empires as they rise and fall. Score VP at the end of each turn (~350 years) when the empires fall. Players start with several resources and 2 workers in their available stock, and workers in the irrigation and weaving boxes. Each turn follows the same steps:1. Collect Resources (grain and textiles) based on relative rank of workers in the irrigation/weaving. Then take 8 workers to available stock (total 10 at start of game). Move all workers in Scribes and Toolmakers to the left (and "Unused") side. 2. Decline (turns 2 and 4 ONLY): each player removes all workers from Dilmun, and 1 from every non-Sumerian region. In the Irrigation and Weaving boxes, the player with the most workers reduces their number TO 2 (with n being the number of workers they returned to supply). The other players remove n workers. Finally, each removes 1 worker from the Scribes and Toolmakers boxes. 3. Player Actions. In turn order (random at start of game), take 1 action. If anyone has passed, you must discard one item (resource, worker, or army) from your available stock to take an action. Continue rotating in turn order till all 3 pass. Action Choices: - Build City. Place one of your city markers in Sumerian region with no other city there. Most give you a special power. If all 4 out, may destroy old city to build new one. - Place Workers. Spend a resource of value x; place up to x workers in ONE location (Scribe box: max 2 workers/player). In addition, or instead, may use each unused scribe to move or place a worker. - Trade. Each worker is allowed to trade 1 resource for 1 of the resource(s) available in their region. Each region only provides 1 of each resource present there. However, if ANY army is in the region, workers cannot do anything. Each army, though, can conduct 1 trade just like a worker. In addition, or instead, you can use worker(s) in the Toolmakers box to convert metal to Tools (1/worker). - Start Empire. 3 available each turn, 1/player. Each has designated start region (2 Sumerian empires -- may start anywhere in Sumer). You must have equal or greater number of workers than any other single player in their home region (except Sumerian empires: no workers needed). Take designated # armies into available stock; may buy more (pay resource(s)). Also, may equip (spend resources; rank by value relative to what other already created empires spent). Then come onto board: if enemy army there, fight. Otherwise (or once enemy killed), place 1 or 2 armies in starting region. - Expand Empire. ... [i]Place Army[/i] token (from available stock) to adjacent region. If enemy army present, fight. ... [i]Destroy City[/i]. If have army in region with enemy city, discard 2 from supply to destroy it -- return to supply. ... [i]Reinforce Region[/i]: place 2nd army into a region (max 2/region). ... After any choice above, may discard 1 army from supply to Expand again. Fighting Attacker rolls 2d6. If better equipped than defender, kills on 5+. Otherwise, need 7+. May continue attacking until decide to end battle, or win and place 1 army in new region (all considered 1 attack; i.e., don't need to discard an army to continue the fight). - Pass. May opt to discard resource(s) as well. 4. Determine Turn Order. Based on resources discarded when passing: most-->least first-->third. If tied, retain relative turn order. 5. Score VP. 2VP/region with your army token. Then in turn order, decide whether or not to improve your cities: each requires discarding 2 wood + 0-4 resources (earn 3-18 VP). If improved, place marker on city -- it won't score again. 6. Reset. Remove all armies from board. Remove all armies and workers from available stock. Advance turn marker. End of Game - After end of turn 5. - Final scoring: player with most [i]workers[/i] in each region scores VP shown on board. - Most VP wins. Tiebreaker = turn order.