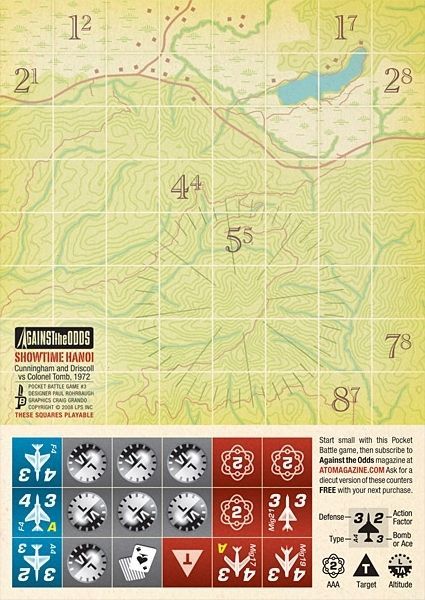 Showtime Hanoi is the third game in the Pocket Battle Games series from LPS, Inc. Cunningham and Driscoll vs. Colonel Tomb, 1972. Showtime Hanoi is a mini-game complete with map, rules and counters. No need for dice, use your own deck of standard playing cards and your initiative to enjoy this simple-but-exciting game. Players control up to three planes each in this NV vs. US Dogfight. NV side consists of Mig17, Mig19, Mig21 and 3 AAA. US player controls 2 F4s and an A4. US objective is to bomb a central target or destroy any of the NV aircraft while losing no US aircraft. NV wins if the target is still on the map or he destroys more than one US aircraft. Map is 8x8 grid.