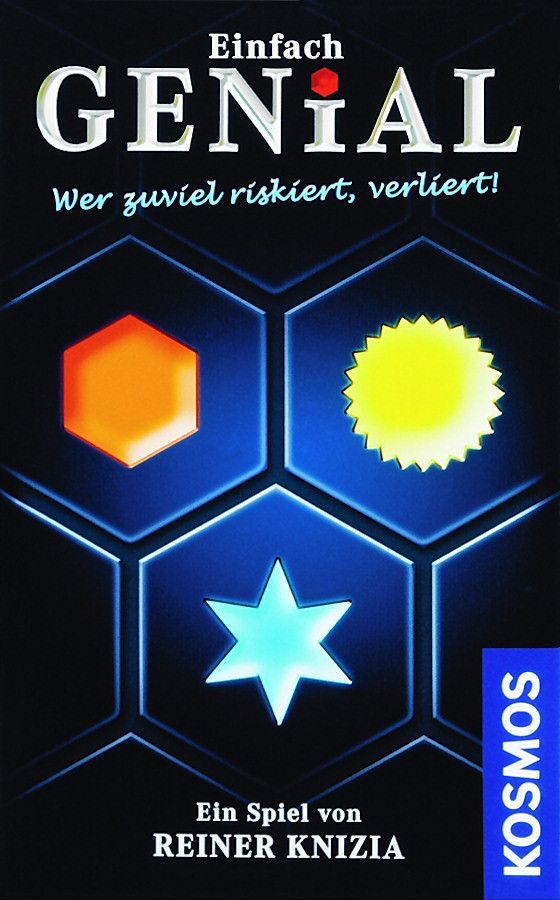 Einfach Genial: Wer zu viel riskiert, verliert! ("Simply Ingenious: Whoever Risks Too Much Loses!") is a tile game related to the Ingenious board game in that players are once again collecting as many points as possible in each color/symbol while also needing to score points in all colors/symbols in order to do well. To start the game, mix all 126 tiles (21 of each color/symbol) face down, then turn three face up and place them in a shared pool in the center of the table. On a turn, a player flips a tile face up. If the tile doesn't match one of those in the pool, he adds all tiles revealed this turn to the pool and ends his turn; if it does match, the player can either end his turn and collect the face-up tiles before him and all matching tiles in the pool, or take another turn. If you're the first player to collect seven tiles of each color, you win. (With four players, the goal is five tiles.) Any tiles of a color you collect over seven are shuffled back into the supply. If a player has a single color with fewer tiles in it than all other colors and a tile of that color is in the pool, the player can take one such tile and end his turn; this rule allows players to work toward that final color they need, while also pushing other players to try to remove that color from the pool. If the pool ever has fewer than three face-up tiles, reveal tiles and add them to the pool until three tiles are available. Einfach Genial: Wer zu viel riskiert, verliert! was later released as one of three games in Fantasy Flight Games' Ingenious Challenges.