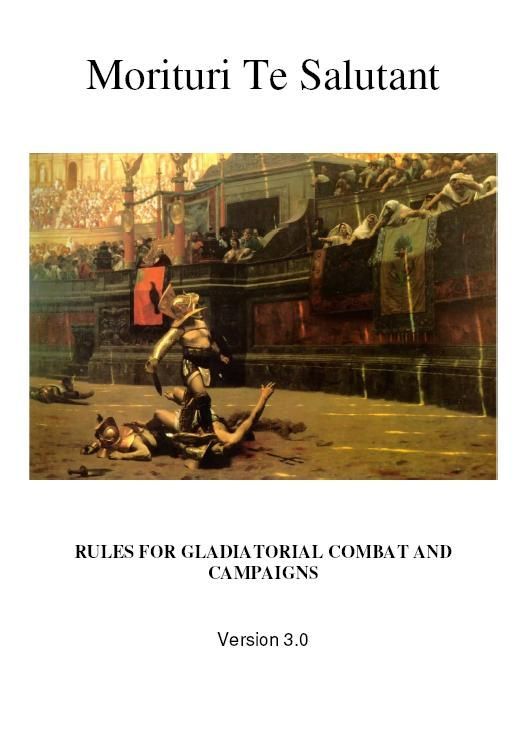 Morituri Te Salutant is a miniatures rule set for gladiatorial combat. It was initially published by Gladiator Miniatures but the current (3rd) edition came out from Black Hat Miniatures in 2008. According to the preface for the latest edition there are no significant differences between the 2nd and the 3rd edition of the game. MTS consists of rulebook (either a pdf or a hard copy); miniatures, dice, markers (beads, etc) and the playing surface have to be provided by the players. The game uses six and twenty-sided dice. Miniatures of any scale may be used. The game is played on a hex grid using pre-selected moves for each gladiator. The moves can be written down on a piece of paper but another popular alternative is to create separate cards for each move. The selected moves are compared on a matrix that gives the difficulty for a strike to hit the opponent. As the game goes on the gladiators gain wounds of varying severity and eventually the loser is either killed or begs for mercy from the crowds. The game includes a system for playing campaigns where each player represents a gladiator school. Initially the schools own half a dozen or so gladiators of varying types (myrmidon, hoplomachon, thracian, etc). Over a campaign year the schools participate in festivals where they compete for the prize money but also can bet between each other. As the campaign progresses individual gladiators gain experience, die, get wounded, and may even earn their freedom. The schools use the money they earn to buy new gladiators but the unfortunate may be driven to bankruptcy. There are 12 different gladiator types each of which has a different selection of moves. For example, a spear-armed hoplomachus has different moves than a retiarius who wields a trident and a net. In addition to regular gladiatorial combat, the game includes rules for mounted combat, archery and beast fights. Multi-gladiator and multi-player combats are possible allowing team fights, last-man-standing games etc. Some play aids can be downloaded from the publisher's Yahoo group. They include a pdf of a hex grid and labels for creating your own move cards.