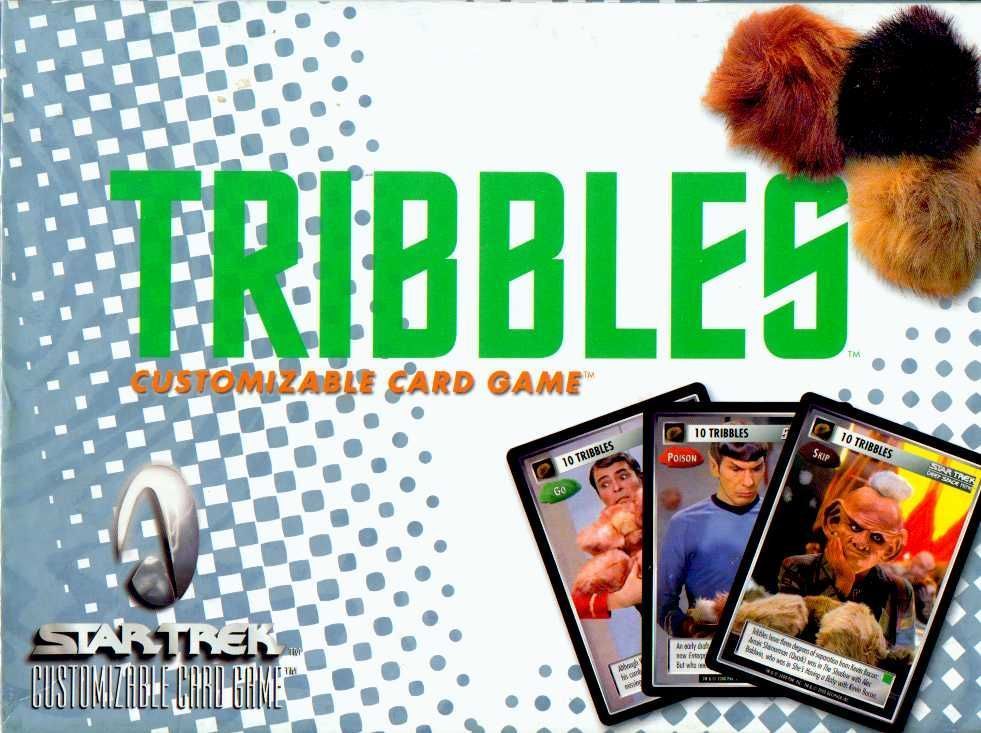 A self-contained spin-off of the Star Trek Customizable Card Game from Decipher, Tribbles is a fairly straightforward card game where you are trying to empty your 7 card hand in order to score points ("tribbles") that you have been able to play. Each card represents a certain quantity of "tribbles" (1, 10, 1000, or 10,000.) The game play follows a sequential order, with each player needing to play the next higher value of tribble out of his hand than the one played immediately before. If no such card is held, the player must pass and draw a card from his personal deck. There are also optional effects on each card, some reminiscent of Uno (among them Skip and Reverse), that vary the play sequence, score some special points, or allow a player to discard a card. A round ends when either a player is out of hand cards or all but one of the players are out of cards in their deck. Only the player who goes out scores points for his Tribbles played that round. Five rounds make a game. The player who scores the most tribbles in those five rounds is the winner. The game provides four pre-constructed decks totaling 112 cards, which are color coded to fit a theme. These cards can be interchanged to create different decks. To make the game even more customizable, "tribbles" cards from the ST:CCG expansion set "The Trouble With Tribbles" are compatible with this game. These cards can increase the highest tribbles card to 100,000, plus add a new special ability (a bonus for collecting a specific set of cards) and different combinations than those included in the boxed set. Also included in the game are reference cards which list the makeup of each standard deck and explain what the special effects are. In addition, you get a scoresheet and even a small pencil.