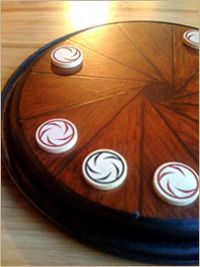 BOARD: there are twelve triangles on the surface of the circular board. Only one stone may reside on a space. STONES: There are a total of 24 stones (12 red & 12 black). Each player chooses one color, red or black. There is one pair of six different kinds of stones for a total of 12 stones per player. They vary in kind: Stone of 1 Stone of 2 Stone of 3 Stone of 4 Stone of 5 "Old Stone" MOVEMENT: There are only two actions a player can perform - placing or removing a stone from the board. RULES: When you place a stone in a space on the board, your opponent must place or remove one of their stones (# of spaces - according to the value of the stone you placed) away from your stone in either direction on the board - to the right or left of your stone. The same rule applies when removing a stone - the logic is the same. The "Old Stone" is unique. When placing this stone, your opponent MUST place a stone in the nearest vacant space to it. When removing this stone, your opponent MUST remove their nearest stone to it. ADDITIONAL RULES ("The Precepts"): First Precept: players are not allowed to touch each others stones. Second Precept: only two of each kind of stone is allowed on the board at the same time. Third Precept: when you remove a stone from a space, that same kind of stone may not be put back in that same space on your very next turn. OBJECTIVE: "Return to the Way": This occurs when your opponent is unable to place or remove a stone.