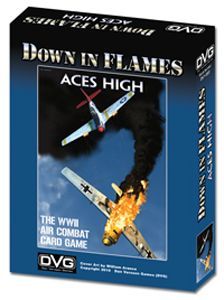 From the Publisher's Website: Down In Flames is our tactical air combat card game. It was first released back in the mid 1990’s and was again released as a computer game through Battlefront in 2004. Brian Marrs did all the programming for the computer game. Down In Flames places each player in the cockpit of a Leader and Wingman as they enter combat against other aircraft. By playing cards, you gain advantageous positions on your targets, fire your guns, and send them down in flames! The game is based on a unique action-reaction card mechanic. Each card can be countered by specific other cards. At the bottom of every card is the list of cards it is allowed to cancel. This makes for exciting card play back and forth between players… Player #1: “I Play an In My Sights for 3 Hits. If you don’t stop it, you’re going down.” Player #2: “I counter with a Barrel Roll.” Player #1: “I react with a Yo-Yo.” Player #2: “You got me.” Each aircraft is accurately simulated with a several ratings including: Performance (the maximum cards you can hold), Horsepower (the maximum cards you can draw each turn), Bursts (how many times you can fire), Damage (how much damage your attacks inflict), and Airframe (how much damage your aircraft can sustain). The air combat is simulated using a Positioning system that allows aircraft to be Advantaged, Tailing, Disadvantaged, or Tailed in relation to other aircraft. An aircraft’s position determine if it can aircraft, and how many bonus Bursts it receives if it is Advantaged or Tailing. The game uses a simple Altitude system to add this vital aspect of air combat. Aircraft get to draw cards when diving, and must discard cards when climbing. The game also includes Light, Medium, and Heavy Bombers that are used in the historical campaign games. Down In Flames has won several awards through the years and continues to be a favorite for both serious and casual gamers. Components 110 Full color Action Cards 110 Full Color Aircraft Cards Full Color Rulebook Full Color Counter Sheet (88 - 5/8” counters) 6 Full Color Campaign Sheets DiF: Aces High is part of the Down in Flames series.