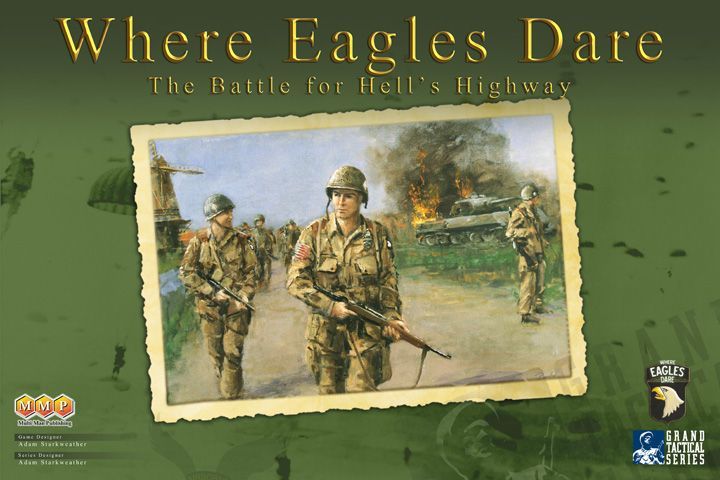 Where Eagles Dare: The Battle for Hell’s Highway is the sequel to The Devil's Cauldron: The Battles for Arnhem and Nijmegen, and completes the Market Garden saga, allowing players to play out the entire operation. In addition, Where Eagles Dare is also a complete standalone game, offering a fascinating game situation in which the outnumbered elite 101st Airborne division must race from emergency to emergency - to maintain the vital lifeline to the British 1st Airborne Division fighting for its life in Arnhem. This single and fragile lifeline would come to be called “Hell’s Highway”. Where Eagles Dare is the next game in the Grand Tactical Series of company level games offered by Multi-Man Publishing. The game will also introduce new terrain types and new special rules to fully explore the battle. Where Eagles Dare will introduce a special off-map movement system to allow the Germans to move forces from sector to sector of the battlefield and a host of other rules to make this game as unique and interesting as The Devil’s Cauldron. Scenarios will include the following famous historical actions: The Breakout from Joe’s Bridge The capture of Aalst and Eindhoven The Battle of Best The battles of Veghel The preemptive American attacks at Heeswijk and Schijndel 4 versions of the grand campaign game Fully linkable rules to The Devil’s Cauldron to allow players to play all of Market Garden All the attention to detail and the same graphic style that has earned The Devil’s Cauldron much praise within the wargame community will also be seen in full force in Where Eagles Dare. From the unknown Dutch farmer that misdirected the advance of powerful Panther tanks on the Son Bridge and may have saved the entire operation to the German air raid on Eindhoven that stalled the advance up Hell’s Highway during a crucial moment in the fighting, Where Eagles Dare will feature many little- known tidbits of history that made this battle so unique. Included in the countersheets are 18 errata & 63 campaign counters for The Devil's Cauldron: The Battles for Arnhem and Nijmegen Game Scale: Game Turn: 2 hours daylight, 8-12 hours nighttime Hex: 547 yards / 500 meters Units: Company Game Inventory: Five 23.5" x 35.5" full-color mapsheets Eleven dual-side printed countersheets (1936 5/8" counters) One 36-page GTS version 1.1 system rulebook One 8-page GTS Rules Summary booklet One 48-page Where Eagles Dare game specific rulebook One Turn Record Chart player air card (single-side printed) Two Terrain Effects Chart/Combat Results Table player air cards (dual-side printed) Six Divisional Unit Display cards (single-side printed) Four 10-sided dice Solitaire Playability: Medium Complexity Level: Medium Players: 2 or more Playing Time: 2-40 hours