No Question of Surrender - Universal Statistics 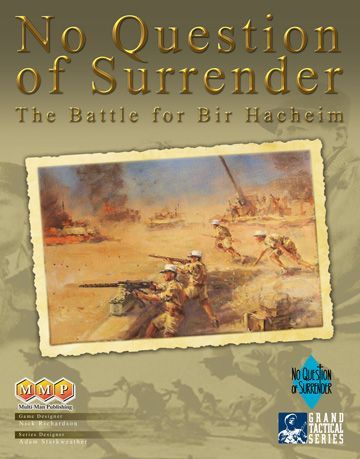 No Question of Surrender: The Battle for Bir Hacheim The Grand Tactical Series moves to North Africa! Taking the acclaimed system used in The Devil’s Cauldron, this game gives players the chance to explore the struggle of the free French forces, including two Foreign Legion battalions, as they attempt to hold out against the might of Rommel’s Panzerarmee Afrika at the southern tip of the Gazala line in an abandoned Turkish fort. Three times the French were asked to surrender, each time they refused, with General Koenig stating that there was “no question of surrender”. No Question of Surrender is the first game in the Grand Tactical Series of company-level games offered by Multi-Man Publishing to examine the North African campaign. The game will also introduce new terrain types to the system and new special rules to cover events from the battle. The Free French, composed of “Gaullists, swashbucklers and criminals of twenty different nations” according to Rommel’s aide Alfred Berndt, have to hold out against the Germans and Italians as Rommel adds more and more strength to try and crack the Großstüzpunkt (major strong point). Scenarios will include: The historical attack by the Italian Ariete Division on the morning of May 27, 1942 An attack by the full Ariete Division on May 27 (to allow players to explore if the Italians could have captured Bir Hacheim) The fight over point 186 where the Germans briefly capture the pivotal observation point, only the be repulsed by the Free French And finally, the full siege starting on June 2 as the Free French try to hold out against ever increasing Italian and German forces. Taking the same level of care and detail that was observed in The Devil’s Cauldron, No Question of Surrender continues the excellence in gaming expected from the Grand Tactical Series. Game Scale: Turn: 2 hours Hex: 364 yards / 333 meters Units: Company Game Inventory: One 22" X 34" mapsheet Three countersheets (528 5/8" dual-sided counters) One 36 page Grand Tactical Series rulebook One 20 page game rulebook One 8 page series rules summary booklet Four Division Tracking Player Aid Cards (1 sided) Two Player Aid Cards (1 sided) Four 10 sided dice No Question of Surrender Credits: Designer: Nick Richardson Developer: Adam Starkweather Graphics: Niko Eskubi