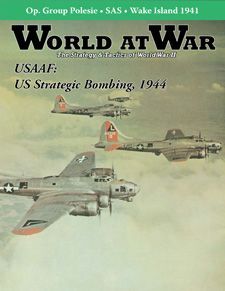 Best estimates today have it that the war in Europe most likely would have continued for about 24 months after February 1944 had it not been for the cumulative effects of the Allied strategic aerial offensive against the Germans. That means the war was most likely shortened somewhere between 13 and 15 months by the effects of that campaign. We say "most likely" and "somewhere between" because we can't be more certain. That is, starting at the end of 1944, the Western Allied and Soviet ground advances began to add their resource-denying effects to the successes being scored by the bombers. Where precisely the effects of the one effort picked up and the other left off is, and will likely always remain, a matter of debate. We can, however, use that December 1944 cut off date to our advantage in this game. We know for certain that prior to that time any collapse of the German war effort would mostly certainly have been due to the bombings' effects. If the "Bomber Barons" were to prove they could win a war with their planes alone, we can now see they had to do it by that date. Thus the would-be Bomber Barons in today's wargame hobby must also bring their efforts to fruition by that time in the game in order to win. In general, each "game turn" represents the cumulative effects of one month of aerial operations. Note, though, Game Turn 3 represents two calendar months. That's because a large portion of US aircraft strength was drawn away from this campaign during that time in order to assist in the battlefield preparation for the D-Day landings. There are a maximum of 10 game turns to each campaign. The large-size, fully iconic, counters included with the game (176 total), are by famed artist Nicolas Eskubi. They represent air groups and wings, along with German FLAK brigades and divisions. Aside from all the formations historically involved in the campaign, an extended German Me-262 order of battle is included. That will allows players to determine, once and for all, exactly how many of those remarkable planes it would've taken to have finally and fully stopped the American onslaught. Each large hex on the map represents 33.33 miles (54 Km) from side to opposite side. The game is of intermediate complexity, is intended for two players, and takes about six hours to complete.