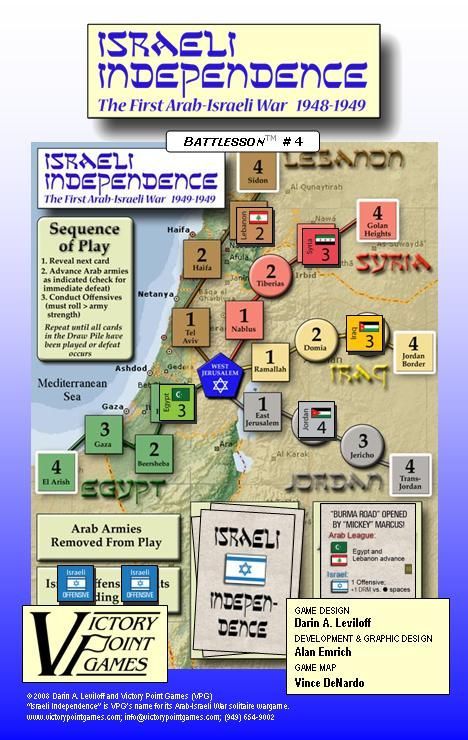 From the Publisher: Israeli Independence is an introductory level solitaire wargame that tells the rich and engaging story of the First Arab-Israeli War – Israel’s War for Independence. Five Arab armies, poised at the borders of the newly declared state, launch their determined invasions – and each must be pushed back in turn before any reaches West Jerusalem, the new Israeli capital. As the headlines unfold and the vast forces of the Arab League relentlessly press forward, can you successfully allocate the precious few resources of the new Israeli Defense Force (IDF) to conduct daring offensives that will send them reeling back? Can you push the Arab legions back so far that an armistice can be achieved and these threats removed? Or will you be over-whelmed and defeated, seeing Zionist aspirations crushed? Wargames recreate situations so that they can be studied and played, and Israeli Independence is particularly well suited to classroom use. The included BATTLESSON (TM) article helps explain this useful and fascinating field of study: wargaming. Expanded by: Israeli Independence Expansion Kit