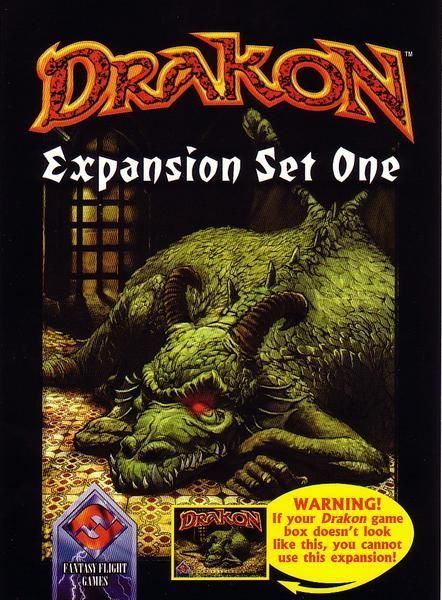 This expansion includes 48 new tiles to add to the basic game and a pawn representing the Drakon itself. Some of the tile functions include Secret Passages (can move between them as if adjacent), the Escape passage (move your hero to it immediately after laying it down), Drakon's Bargain (buy a tile from the board into your hand), Base Structure (tiles attached to it cannot be altered), Small Chamber (blocks movement when occupied), Void (miss next turn, reappear anywhere on board turn after that), Tornado (must move 4 chambers on next move), and Summon Drakon (places the Drakon token on an empty chamber, subsequent landings allow you to move it up to 3 chambers; Drakon sends heroes back to the start less 1 gold.) version compatibility Although the package says that this expansion cannot be used with the first printing of the game (with a red dragon on the cover) and can only be combined with the second printing (with a green dragon on the cover), using it with the first printing is not that big of a problem. The only difficulty is that the backs of the tiles will have different pictures, and of minor note is that the newer tiles are a little thicker than the old ones. Note that the expansion will not work with the newer Drakon (third edition) because it has larger tiles (measuring 2.5 by 2.5 inches), and the 3rd Edition doesn't really need it since it already includes some of the expansion tiles.