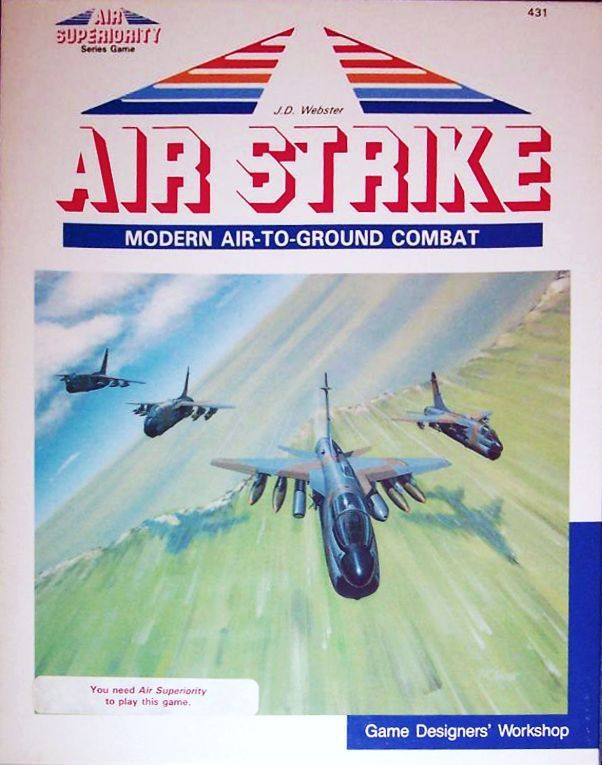 Air Strike is a module for Air Superiority which adds rules for "modern" air-to-ground combat. 32 base aircraft types and all their variants are added as are ground attack weapons (including iron bombs, laser guided bombs, radar seeking missiles, etc) and ground units including AAA and SAM weapons. From published material... "Air Strike expands the proven and successful Air Superiority system to encompass air strikes against targets on the ground. New rules cover: Terrain-following flight, air-to-ground attacks (including strafing and bombing), antiaircraft artillery, and surface-to-air missiles (SAMs). Air Strike continues Air Superiority's easy-to-learn format. Rules are presented in a programmed structure, followed by scenarios demonstrating their use. Air Strike provides 32 new aircraft for the Air Superiority system, including: the Warthog (A-10s), F-1 5 Strike Eagle, Harrier II, Alpha Jet, SU-25, and MIG-27. Six new multi-color maps provide the varied and treacherous terrain over which players must find their targets. Included are 480 counters, representing everything from radar sites to the most modern air-defense missile and gun systems in service today. Trucks, tanks, infantry, and other targets are provided as well; but remember, on today's battlefield, what can be shot at can shoot back. Air Strike includes 25 scenarios suitable for solitaire, two-player, or multi-player play. Ranging from the Mideast to Germany, from Afghanistan to Africa, these scenarios provide players with a wide variety of complex and interesting situations. Several of these can be played both as solitaire and as multi-player simulations. The briefing booklet helps bring players up to date on the weapons and aircraft included in this game. It is a helpful aid to learning the abilities and limitations of the aircraft and weapons depicted in Air Strike." Game Components 480 die-cut counters, six maps, one rules booklet with aircraft briefings and game scenarios, one data card booklet, one set of game charts"