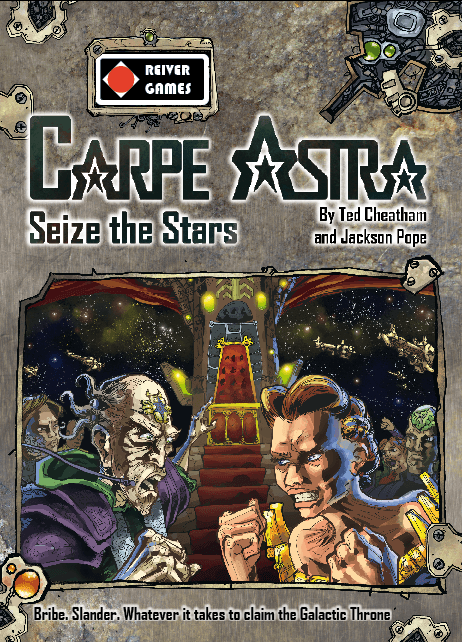 10,000 years in the future, humanity has claimed the stars. But all is not well. The Emperor is weak, and without strong guidance, the Empire is crumbling. Powerful guilds within the empire are squabbling, positioning themselves for their own gain. If the Empire is to survive, it needs a strong leader - that means you! You must build a power base throughout the Empire by connecting with important guilds: the military, traders, priests, engineers, expansionists, and politicians and then claim the throne. Time is running out, though; others also struggle for the throne. You must form a network of support with powerful guilds and slander your opponents. Each connection gains the support of some guilds, and at the end of the game the player with the most support grasps the Galactic Throne. Take advantage of events that occur for further gain. Be careful, though, because each slander you receive reduces your support. The name "Carpe Astra" was chosen after Jackson Pope asked the users of BGG to brainstorm a name for the game.