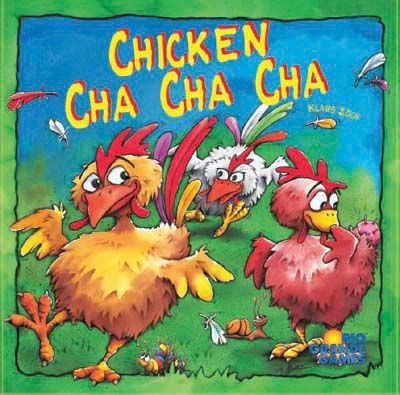 Theme: Chickens are learning to dance ("cha cha") by completing circuits around the yard. Goal: To "cha cha" your chicken past every single other player's chicken, stealing each one's "tail feathers" as you go by them. The first player to collect all of the tail feathers wins. Setup: There are two sets of large, thick cardboard tiles. One set of 12 are shaped as octagons, and the other set of 24 are shaped as eggs. Each octagon shows a different chicken-related image, and the same image appears on two of the eggs. The octagons are spread out randomly on the table, face down. The eggs are then arranged randomly, but face up, in a large circle around the octagons, creating a kind of "pathway" of egg tiles that is encircling the "yard" (of octagons). Each player has a single large wooden chicken in their color, and each chicken has slots on its backside into which wooden "tail feathers" may be stuck. Each chicken begins with only one tail feather, in its color. The chickens are then placed randomly on the egg tiles, with an equal number of unoccupied tiles separating each chicken from the next chicken "ahead" of it on the pathway as separate it from the next chicken "behind" it, with the goal that they be well spread out on the pathway. Gameplay: The game is then played in turns, with players attempting to move their chickens clockwise around the pathway. On a player's turn, she looks at the image on the next egg tile in front of her chicken. The player then turns over one of the 12 face down octagon yard tiles. If the tile turned over shows the same image as the egg tile, the player moves forward one space on to that egg tile, turns the octagon back face down, and then repeats the process with the next egg tile. When the player turns over an octagon with an image that does not match the next egg tile in front of her, her turn ends and her chicken goes no farther. If the next tile in front of a player is occupied by someone else's chicken, then the player looks at the image that is on the egg tile in front of the other chicken, and then attempts to turn over the octagon showing *that* image. If the player succeeds, her chicken "leapfrogs" over the chicken in front of her to land on that egg tile, and in the process steals all tail feathers that the other chicken had - including those it stole from other players in the same manner. When one player has all of the tail feathers, that player wins the game. In Sum: A creative memory game that ties memory to pawn movement. The first player to successfully memorize the images on each of the 12 octagon tiles, both from their own turns and from watching other players flip the octagons on their turns, will be able to move their chicken around the yard without stopping, and in doing so will win the game. The placement of the octagons is random, so the challenge is fresh each game. This game is part of The Chicken Family of Zoch The Zicke Zacke Igelkacke version has the same rules but hedgehogs instead of chicken, and it's in a smaller box. The Hasbro version has the same rules, but is a Dragon Tales re-theme with large cardboard dragons as player pieces.