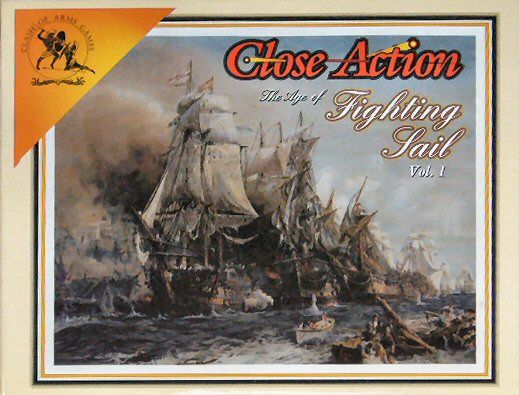 The Age of Fighting sail vol 1 In the end, Napoleon lost his war with England. Triumphant against all the thrones of Europe, never could he penetrate the walls of oak that surrounded Albion to land an army and deliver the knockout blow. Discover the secrets of Britain's superior ship handling in the age of sail with Close Action. Some 25 scenarios, ranging from ship vs. ship (training exercises) to fleet actions (the Nile Campaign) cover a variety of British, French, Russian, Turkish, and Spanish ships throughout the period. In addition to the Napoleonic Wars, there are selected actions from the American War of Independence and the War of 1812. Developed for over 10 years by Mark Campbell, Close Action features 70 1"x ½" ship counters, 140 markers and accommodates from two to sixteen players on its two 34"x22" maps. If your interest runs to miniatures, the rules and charts need no changes to adapt to the "big mat." Can you do better than Nelson? Or, will you do what no one ever did and defeat him in a fleet action? Sail alongside, for it's sure to be a Close Action. (source: Clash fo Arms website) Close Action is all about teamwork and out-maneuvering one's enemy by coordinating the movements of a fleet of wooden ships. You plot movement for your ships, send signals to your friendly captains, and assign crew to various tasks such as changing sails or firing the great guns. Played on a hex grid, the ships move fairly accurately and historic battles can be recreated with lots of realism. This games scales extremely well, playing as well if not better with 20 players as with 3, 4 or 5. (source: user's description)