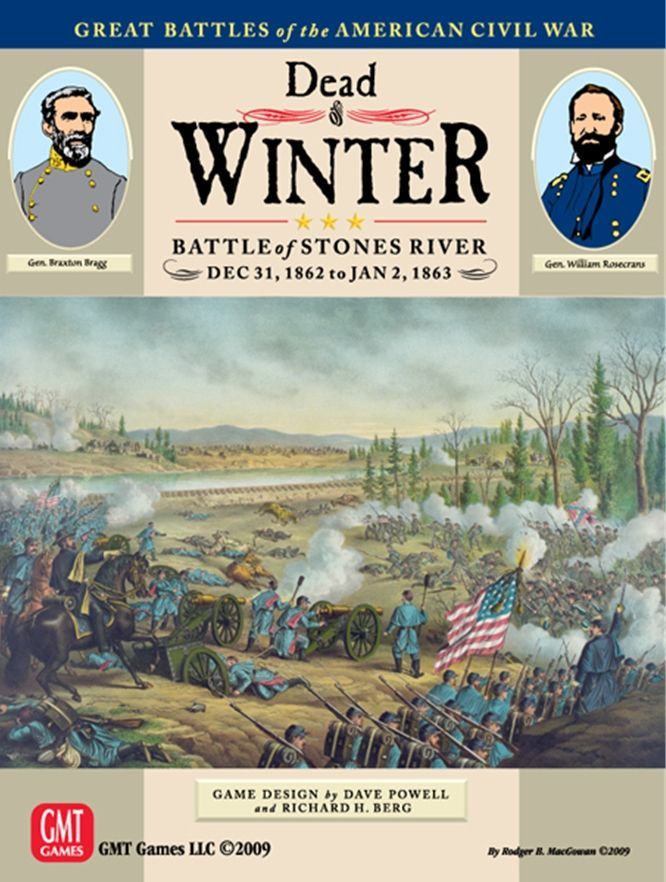 Dead of Winter is GMT’s recreation of Richard Berg’s “Great Battles of the American Civil War series” series title on the battle of Murfreesboro; also known as The Battle of Stone’s River to Union Veterans. Perhaps one of the most evenly matched battles of the war, Murfreesboro/Stone’s River pitted the Federal Army of the Cumberland under Major General William Starke Rosecrans against the Confederate Army of Tennessee captained by General Braxton Bragg. With near parity of numbers (each side fielded roughly 40,000 men) and remarkably similar battle plans, both armies grappled in the December cold for control of Middle Tennessee. The Series: The GBACW Series is one of the hobby’s longest lived design concepts, springing from the legendary regimental Level Gettysburg game - Terrible Swift Sword - created by Richard Berg in 1976. Since then, the series has undergone numerous system evolutions, always seeking to enhance the player’s illusion of reality. Today, the series relies on inter-active chit-pull mechanics to simulate the sometimes chaotic nature of the 19th Century battlefield. GMT's Red Badge Of Courage and Gringo! Are the two most recent releases in this classic line of games. The Game: Dead of Winter II completely revisits this battle. The old version needed a face-lift. The biggest change is in returning the ground scale to 110 yards per hex. While going to the larger scale means an increase in maps, the added elbow room allows for much more historical unit frontages and more playable stacking. One Introductory and ten regular scenarios examine every aspect of the historical battle and present the players with several plausible alternative situations based on events leading up to the actual engagement. Scenario sizes range from one-half of one map and an hour to play, to all four maps and many enjoyable gaming hours. Also included are a number of optional forces that could have plausibly been brought into the fight; Keep your opponent guessing as to what he will face next with this interesting range of options. The Team: While Richard Berg remains the final authority for all things GBACW, and John Alsen continues his invaluable role in the development of each title, Dead of Winter II adds one more well-known gaming name to the mix: Designer Dave Powell. Dave has designed more than a dozen civil war simulation games with The Gamers, Inc, (now owned by MMP.) Dave has always loved the GBACW since the moment he first opened the box for TSS, and welcomed the chance to bring his design talents and historical skills to the Dead of Winter project. Game Design: Dave Powell Series Design: Richard H. Berg Developer: John Alsen