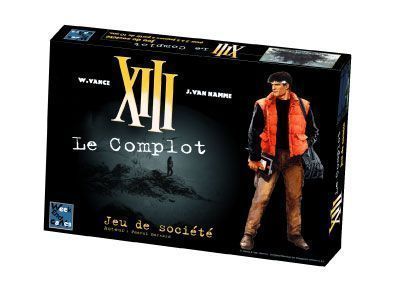 (from Tilsit's page: http://www.tilsit.fr/fiches_jeux/xiii.php) Vance and Van Hamme have created a very successful graphic novel series entitled "XIII" --it currently boasts 20 albums (along with 5 albums in it's spin-off series: XIII mystery). In Tilsit's game XIII : Le Complot based on that police/thriller world, you play each of the 27 key characters in turn. Your goal is to surmount all obstacles (traps, ambushes, plots) thrown in your way. The board shows 33 of the albums' key locations; by traveling to each, you assemble a team able to complete a maximum of missions. Each completed mission awards you investigation points which are necessary for victory. Of course, there aren't enough missions for every player to win... The combat encounters will be bloody, and the combined strength of your agents and characters won't be enough --you'll also need to plan your moves and play your cards right... XIII is an amnesiac whose identity is hotly debated throughout the series. Various agencies (such as the NSA) have tentatively identified him as various notorious hit men / terrorists / secret agents --but XIII isn't an easy man to catch!