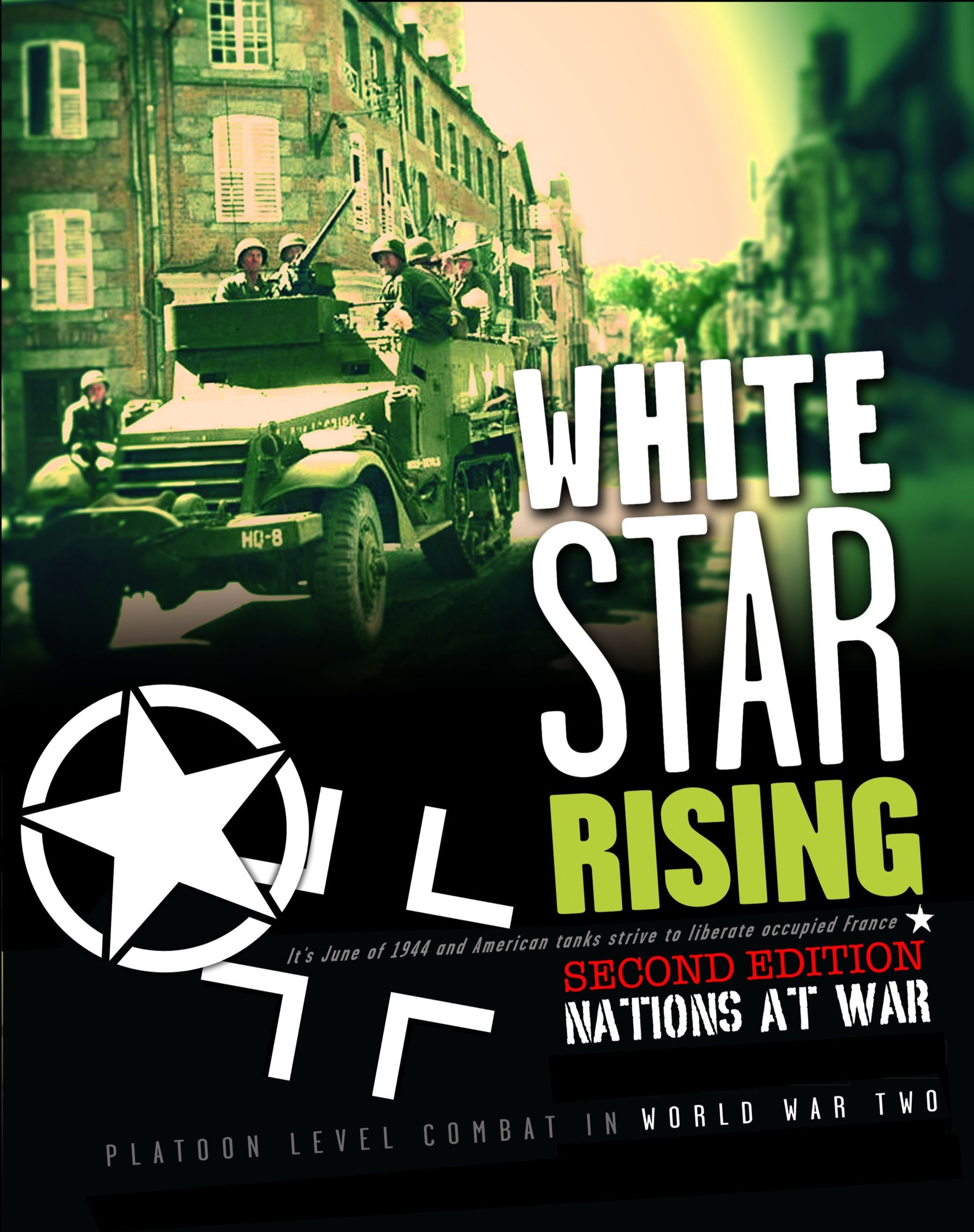 Publisher's blurb: "White Star Rising introduces Lock ‘n Load Publishing’s Nations at War (NAW) game system. Based on the popular World at War, NAW depicts platoon level combat in World War II. Here you’ll find everything you're looking for in a platoon-level game -- armor, artillery, infantry that serves as more than cannon fodder, command and control, air support, amphibious landings, and desperate close assaults that leave the victor in possession of the ground and the defeated in headlong retreat, all in eight pages of rules. That’s two less than the World at War system. "Units represent platoons of vehicles, such as M-10 Wolverines, M4A3E8 Easy Eight Shermans, and German Panthers, Tigers, and Mark IVs. Of course White Star Rising isn’t all about tanks. There’s plenty of infantry; paratroopers, line doggies, Fallschirmjaeger, and Volksgrenadiers. In the same vein as the World at War system, the infantry are capable of moving fast and hitting hard. White Star Rising also includes support weapons, such as heavy machine guns, flamethrowers, and satchel charges that infantry platoons can use to lethal effect. "The system throws typical turn-based gaming out the window. The platoons are grouped into formations (usually battalions and kampfgruppen) and led by a headquarters. Each unit of the formation must be within range of the HQ to activate with its formation. Although individual units might activate, and recon units can double their range from the HQ, you’ll want to keep those formations together. The formations are activated by chit draw, and better-trained, better-led units can activate more than once in a turn, moving, shooting, and fighting in each activation. On the flip side, there is no guarantee that a formation will activate even once. The cup into which the formation chits are placed is seeded with end turn chits. When the second end turn chit is drawn the turn ends. Doesn’t matter if a single formations has activated; the turn is over. It keeps you on your toes. "When attacking, each platoon rolls a number of dice equal to its firepower. Every die that equals or exceeds the “to hit” number (right superscript) hits the target. The target then rolls a number of dice equal to its armor factor plus terrain advantages. Each die that equals or exceeds its armor factor negates a hit. The first hit disrupts a unit, second reduces it, the third eliminates it. "Units may also close assault, entering the opponent’s hex to either deal a death blow or force him (or her) out of valuable terrain. Same procedure, but both units use their close assault value. The side that takes the most hits must retreat from the hex. Infantry is VERY good at this, especially against armor without its own infantry support. "Game includes rules for thin-skinned vehicles, support weapons (actual counters that represent heavy machine guns, flamethrowers, and satchel charges that add to an infantry platoon’s capabilities), air support, bunkers, wire, artillery, mines, overruns opportunity fire, line-of-sight rules that have been streamlined since their inception in World at War, transporting infantry--and all in eight pages of rules." Other Games in Series: Nations at War: White Star Rising Nations at War: Desert Heat Nations at War: Stalin's Triumph Nations at War: White Star Rising â€“ Airborne Nations at War: White Star Rising â€“ Operation Cobra Re-implements: World at War: Eisenbach Gap