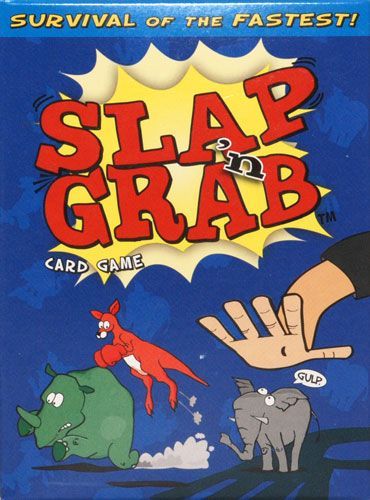 The Party Game That's Survival of the Fastest! Slap-N-Grab is a fast-paced free-for-all where opponents spring into action slapping down and grabbing cards based on colors, counts and cartoon creatures. All the animal cards are dealt out. Cards have 1, 2 or 3 colored animals on them: elephants, rhinos, kangaroos, monkeys or cows. Two Slap Cards are played face up, for example "Four Cows" and "Three red monkeys." Players then sequentially flip over animal cards until exactly 4 cows or 3 red monkeys appear among them all. At that moment, players race to slap the corresponding Slap Card and win the round, taking the slap card as a prize and turning over another one. If you make a mistake and the required animals are not showing, you must return a previously won card to the bottom of the slap deck. When the slap deck is gone, players count how many they have won and the player with the most wins.