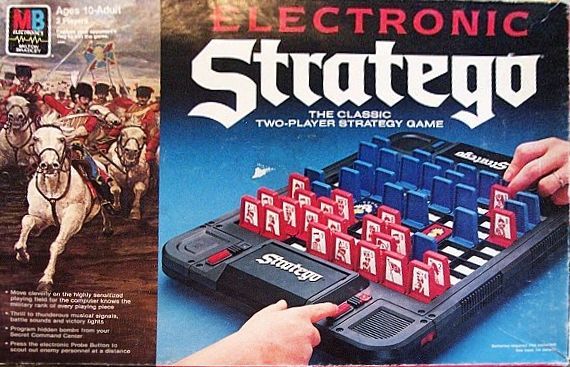 An electronically enhanced version of Stratego from back before personal computers were commonplace. Game play is the same as the classic board game except for a few interesting twists: · When you attack an opponent’s piece, the computer tells you whether you have won, lost, or tied. So you do not know the exact strength of the opposing piece, only its strength relative to your own piece (and so too your opponent does not know the exact strength of the piece you used to attack with). This feature makes the game quite a bit more interesting than standard Stratego. · Instead of moving one of your pieces on your turn, you can “probe” an opposing piece to find its strength. You will not be given its exact strength, but instead what “class” it is in (8-9, 5-7, or all else) · Bombs are no longer playing pieces but are hidden features on your side of the board that are programmed into the game. You secretly select six spaces in which to place the bombs. Your own pieces can move through these spaces unharmed, but any enemy pieces (except a Miner) landing on these spaces will be destroyed! · Scouts can move and strike diagonally, and can strike from a distance. The player who finds and captures his opponent's flag first wins the game.