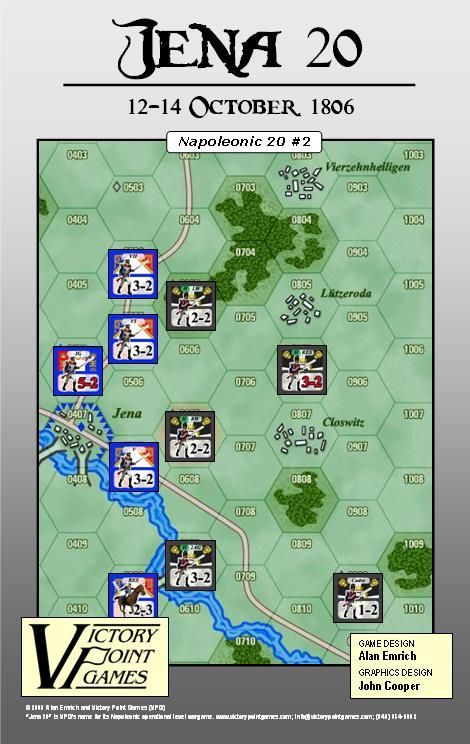 Following France’s glorious victory against the combined Austro-Russian armies at Austerlitz the previous December, the Prussians have finally come off the fence and declared war against Napoleon. As both sides maneuver, uncertain of the location or center of gravity of the opposing army, they met in a dramatic double battle on the fields of both Jena and Auerstadt. Can the heirs of Frederick the Great maintain their composure and cohesion long enough to teach the haughty French a lesson, or will Napoleon and his Marshals ride on to ever greater glory? With only modest complexity and a focused scope employing low unit density on the map (20 pieces or less) and dramatic, fast playing turns, it is the addition of ‘story-driven’ random event cards and night game turns providing the operational pauses and “friction of war” that gives players a great feel for the parry-and-thrust of a Napoleonic campaign as the armies close for battle. Scale: Each unit is 1 corps, each hex is about 1000 meters, and each turn is roughly 3.5 day hours (or 10 night hours). Game Components: • One 8-page, color instructions booklet, with Standard and Optional rules included • 1-page sheet of Exclusive rules • 40 color, die-cut 5/8” mounted game pieces • 12 random event cards • One 11” x 17” color game map • One 8.5” x 11” color player aid sheet