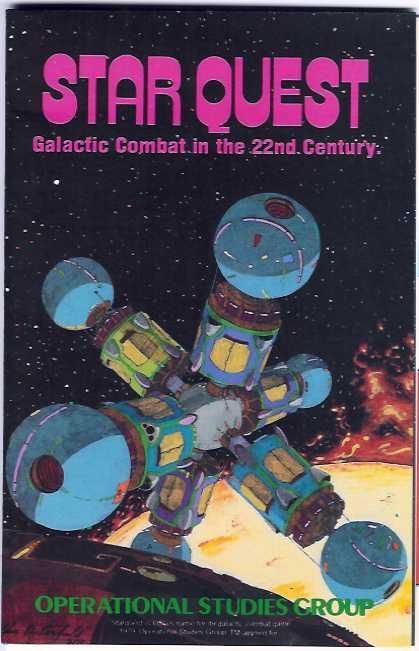 "Galactic Combat in the 22nd Century!" A game of interstellar combat between the six great trading Houses that control the exploration of the galaxy in the 22nd century. Plan out your moves while expending energy to accelerate and decelerate, travel in and out of hyper-space, lauch and evade missiles. Can you survive and make it to the prize before anyone else? Starquest is a game of Interstellar combat as the spaceships of from two to six players move and fight around an unexplored star system. To survive Players must learn the most effective ways to accelerate and decelerate their spaceships, how to launch and evade missiles, how to deal with the powerful gravity field of the star itself and when to risk a return to Hyperspace. The game contains a colorful map, 100 cardboard playing pieces and a short rules booklet. Starquest is a fast moving game that can be played in anywhere from a few minutes to an hour.