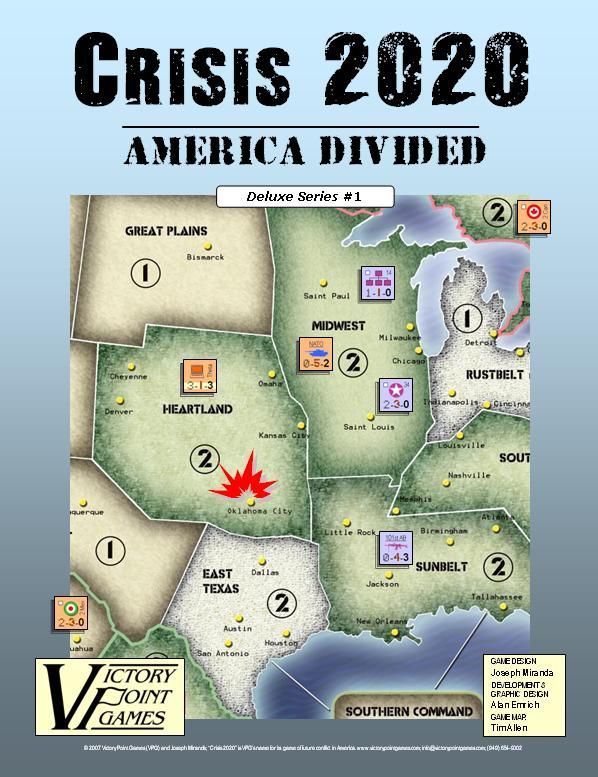 When developing tensions break out into open conflict, all of America becomes a war zone as the Government and Rebels clash. The crisis is at hand, but armed conflict is only half the battle because modern wars are also fought on a ‘data’ front of public opinion. CRISIS 2020 offers players fascinating choices between force and finesse – between striking power and subtlety, as they strive to raise new recruits while converting, neutralizing, and eliminating the opposition using cutting edge ‘Cyberwar’ concepts that are employed by armed forces and insurgents all over the world. And it is the preservation and use of political power, in the form of Crisis Cards, which can make or break an operation. Should you consolidate regional governments to ensure local control? Call out the National Guard to defend a region and improve its ability as a recruiting ground? Send in an FBI Strike Force to deal with the rabble-rousers and cyber-punks? Suspend elections? Issue an Emergency Decree? Or seek Foreign Intervention from the U.N., South America, Canada, Mexico, or NATO? Time scale: Each Game Turn equals 4 months Unit scale: Military Divisions and Brigades Game Components: One 11" x 17" full color game map One 8-page, illustrated, color rules book One scenario listing / game setup sheet Two player aid sheets 80 Crisis cards 120 full-color, mounted, two-sided die-cut game pieces Reimplements: Crisis: 2000 Buy Microbadge