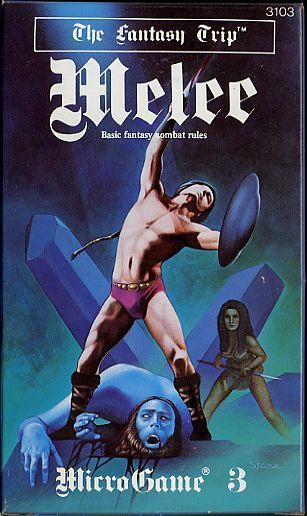 Microgame #3 in the Metagaming Microgames series is a board game of pre-gunpowder individual combat. On a hex map representing an arena, players fight it out with cardboard counters. Fighters are rated for Strength and Dexterity and can carry weapons and armors of various advantages and disadvantages. Included a 32-page booklet (4¼" by 7", or half-legal size), with a hex map (8½" by 14", or "legal" size) and counter sheet. Melee was released with three different covers, the first two both appearing in 1977 and the third in 1979. All were released in plastic ziplock bags. In 1981 there was a fourth edition which was boxed with a cover almost identical to the second edition (lettering changed from red to white). This system was later developed into Advanced Melee, one of the three books of the The Fantasy Trip role-playing system. After Steve Jackson and Metagaming had parted he lost control of his creation. He responded to this by adapting the basic rules into a new system: GURPS, the Generic and Universal Role Playing System. Steve Jackson has reacquired rights to TFT and is publishing the Legacy version. More information can be found here... https://rpggeek.com/rpgitem/256884/fantasy-trip-legacy-edition Integrates with: Wizard Reimplemented by: Legends of the Ancient World (RPG) Heroes & Other Worlds (RPG)