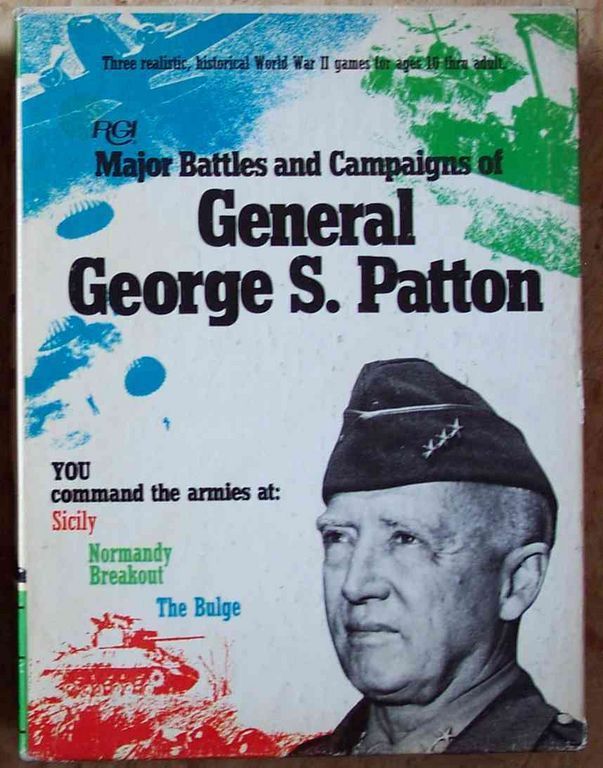 You command the armies (one player plays the Allies forces and one player plays the German forces) during three of the greatest battles of WWII (that Patton participated in, of course). Three complete games are included: Sicily-Invade and capture Italy's southern island fortress, Normandy Breakout-Direct the critical campaign on the sweep to Berlin, and Battle of the Bulge-The daring breakthrough to Bastogne. A two-sided (19" x 26") game board is provided. The game maps are historically accurate, as well as the initial troop deployments. Troop movement per turn is dictated by 24 troop movement cards. Allied and German units are 112 die cut cardboard pieces. Battles are resolved using 5 red and 5 white battle dice. The game plays very well for a wargame of its age. The troop movement card deck works better than one might think. Moving the little cardboard counters is typical of wargames of this era. And the battle resolution based upon rolling multiples of any number seems unbalanced at first, but after a few plays you realize that it too works as well as the troop movement card deck. Two very innovative wargaming mechanisms that allow for quick movement and battle resolution. Thus the game moves fast, but does not sacrifice battle and movement detail(s). Copyright (c) 1973 RGI - Research Games, Inc and ATHOL Game Co., 200 Fifth Ave., New York, NY 10010 Also see: Major Campaigns of General Douglas MacArthur