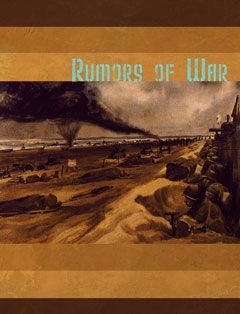 (from Avalanche Press website:) Third Reich is one of the best-known board wargames ever published. It came to Avalanche Press in 2001, followed by The Great Pacific War in 2003, and a Player's Guide in 2005. Rumors of War is a new expansion for either or both games, with a map stretching from the eastern edge of the Third Reich Deluxe Map to the Ural Mountains, and adding Iran, Iraq and the Persian Gulf on its southern edge. It's at the same size and scale as the Deluxe map, with new objectives and countries to conquer. There are also 80 die-cut-and-mounted playing pieces, with the Iraqi and Iranian armed forces, Russian nationalists, Irish, Latvians, British, Italian and Soviet marines, German cavalry and mountain troops, Indonesian nationalists, atomic bomb markers and much, much more! David Meyler brings us variants for Iran, for Romania as a major power, and of course for more things Dutch. Jeff Adams gives us strategy tips for Operation Sea Lion, Tim McBeth makes the dismal science of economics exciting, and William Sariego looks at island-hopping strategies and the French war effort. Rumors of War is not playable by itself, but instead brings more fun to your gaming table with either or both of Third Reich and The Great Pacific War.