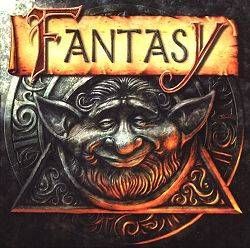 A simple family card game wherein players try to collect the most fairy-folk in their forest. Each folk has a special effect that triggers when (s)he is played and alters the balance of the game. Publisher Blurb: Use your spells to become the Grand Master of the Woods! The Fantasy forest is in a state of upheaval! Fed up with all the chaos, the inhabitants have decided to elect their own leader. Gathered together in the middle of the forest, dryads, elves, goblins, hobgoblins and leprechauns are engaged in a fierce struggle to see who will become Grand Master of the Woods. Each race has its own magical power: dryads can steal cards already played by an opponent, gnomes can take two extra cards... Knowing how to use these spells will be vital for victory! At the beginning of the game, each player receives five creature cards. On their turn, players draw a new card and then play a card from their hand, immediately applying its effects. In order to win, players will have to get the most creatures on their side. Expanded by: Fantasy II