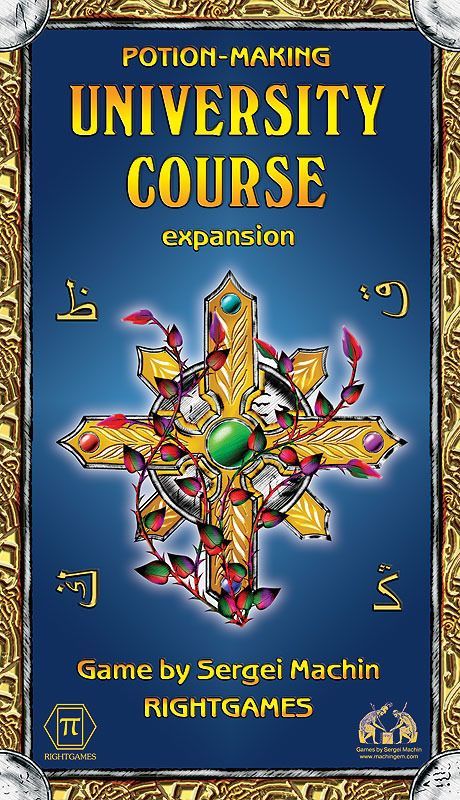 Potion-Making: University Course, the first expansion for Potion-Making: Practice, provides an advanced program of magic and sorcery for students who already know how to mix simple elixirs and make magic powders, students who are not afraid of mysterious spells and creatures. Potion-Making: University Course consists of a deck of 63 cards, with new ingredients, spells, creatures and recipes. This deck is not mixed with the deck of the base game, Potion-Making: Practice, but rather placed next to it. Each of your turns will now consist of three phases in which you can take cards from either deck and play them. For example, you can draw two cards and make a potion, or you can place a card on the table as an element and use this element for a new potion immediately. Thanks to the new rules, it's possible to make different sophisticated combinations. Four "Lesser Talismans" give players certain bonuses; for example, the Lesser Talisman of Usefulness gives you 1 point for any card you play as an element, even if the desk already holds that element. The special artifact "Scruple of Conscience" can be passed to any player who has more points than you; he must add the card to his hand and lose 5 points – but be careful as this card can boomerang back to you. The new "Haste" spell let you play two cards in a row, while "Magic Vortex" places all ingredient cards of all completed formulas on the desk of elements. Now you'll have a huge choice of elements! The expansion Potion-Making: Guild of Alchemists can also be combined with University Course, which means three separate decks would be in play.