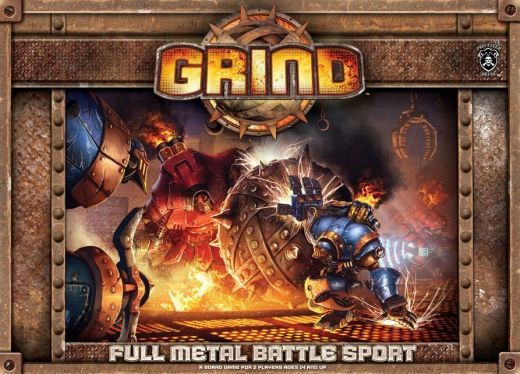 Suspended just above a lake of seething magma, this flamescorched arena is ground zero for the most brutal sport ever created—Grind! Here 10-ton, ash-spewing, steam-powered robots called steamjacks fight to move a giant, spiked ball into the other team’s goal. Using every weapon in their arsenal, these steamjacks slam, smash, and crush their way through the opposition as they tirelessly slug it out for the title. The Destructodome is the battlefield for two rival teams of armored metal warriors: the Iron Storm and the Steel Fury. With their eyes on the prize, these two teams will stop at nothing to own the blistering field, so pack your playbook with cunning maneuvers, loadout your team with devastating weaponry, and get ready to stake your claim to glory. For the next hour, you’ll be calling all the shots as you vie for total domination of this metal-on-metal contest. Your strategy must be merciless. Your resolve, indestructible. In Grind, only victory can quench the burning fury within these unstoppable machines. The Grinder is about to drop. Stoke your fire and brace for battle!