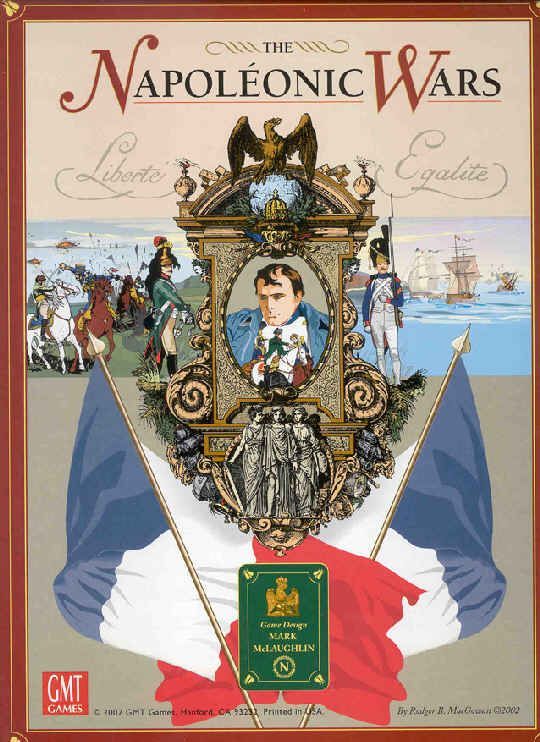 From GMT games: In The Napoleonic Wars, GMT Games brings you a fast-paced, tension-filled, card-driven wargame with a point-to-point movement system that pushes the envelope in a new direction for a pivotal period of history. Rooted soundly in Mark Herman's award-winning We The People system, The Napoleonic Wars provides refinements that allow two-to-five players to play an exciting game requiring two to ten hours. The majority of your games will easily end in a single evening, thanks to sudden death victory conditions providing variable game lengths that eliminate the "end of the world" phenomenon that plague many games. Often, you'll set 'em up and knock 'em down twice a night, and once in a great while your Campaign game will require two nights of play for the terrific panoramic history to unfold before your eyes. Like similar card-driven games, The Napoleonic Wars provides strategy cards that are played as events or to activate leaders, armies or fleets (by play of command points) to move on the map. Players must constantly weight the value of an event or reaction card against the need for its command points. Command points themselves can be played for a wide variety of activities, making play unpredictable and fresh with each sitting. Uncontrolled powers are governed by a diplomatic track which is also affected by play of command points and events. Expanded by: Napoleonic Wars: Super Deluxe Map Revised by: The Napoleonic Wars 2008 Update Kit (upgrade to 2nd edition) Re-implemented by: Wellington The Napoleonic Wars (Second Edition) (aka 2008 reprint Edition)