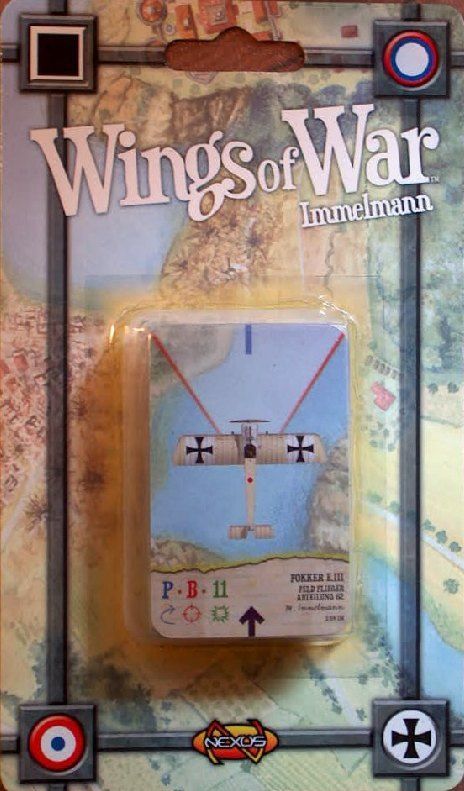 Each Wings of War Booster Pack includes a set of 72 new cards (half the cards normally included in a complete set of Wings of War) which expands on the existing games and usually allow the players to fly 2 additional planes. This specific booster has three maneuvre decks instead, giving the opportunity to fly three machines instead. In the Immelmann booster pack, some of the earlier fighters are included in the game: Fokker E.III and E.IV, Morane Saulnier N, Airco DH2. Airplanes with both single and twin machineguns are included, featuring also a couple of experimental machines that saw actual action: a twin-MG Halberstadt D.III and a Fokker E.IV with three Mgs that was flown personally by Max Immelmann. The decks included are two copies of the new P one and a copy of the G. The latter was already included in the Watch Your Back! box. A Wings of War Booster Pack is not a complete game. The Immelmann Booster Pack requires to play any other Wings of War game set (Famous Aces, Watch Your Back!, Burning Drachens), with the special rules for replacing B damage cards with A ones if you don't have them (halving damages down). Part of the Wings of War series