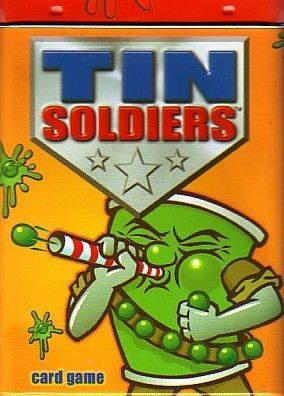 From Game: "Food Fight! It's chaos in the kitchen and the cans of food are 'revolting'. Spoiled little peas think nothing of creaming the corn and stewed tomatoes relish in dent-n-run tactics. Pull out the big guns with the Catsup Cannon! Chop, peel and squash your way to victory in this hilarious game of King of the Kabinet." Game comes with 55 cards & 1 metal finger of fate in a nice tin container. A clever trick taking game from Al Newman that many have played as his prototype 'Toy Soldiers'. This is a great partnership game.