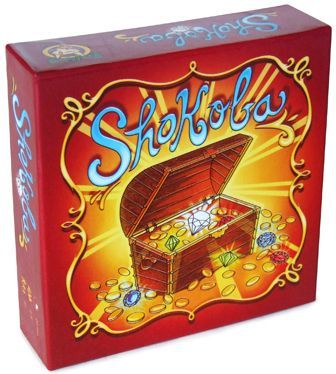 Inspired by the traditional Italian game of Scopa, Shokoba is a card game in which two to four players play cards from their hands to collect jewel cards from the table. (With four players, Shokoba is typically played in teams.) The forty-card deck consists of 27 sapphires, 9 rubies, 3 emeralds and 1 diamond. At the start of a round, each player receives three cards in hand, and four cards are placed face-up on the table. On a turn, a player must play one card. If the value of this card equals a card on the table or is the sum of two or more cards on the table, that player must collect these cards, along with the card played; if not, the card is placed face-up on the table. If a player takes all the cards on the table, he receives a gem as a bonus point. After all players have played their three cards, they receive three more cards from the deck but no new cards are added to the table. Once players have gone through the entire deck, the game ends and five points (gems) are handed out: One to the player who collected the diamond; one each to the player who collected the most sapphires, emeralds or rubies; and one to the player who collected the most cards. In the event of ties, no one collects a point. The first player to collect eleven gems wins.