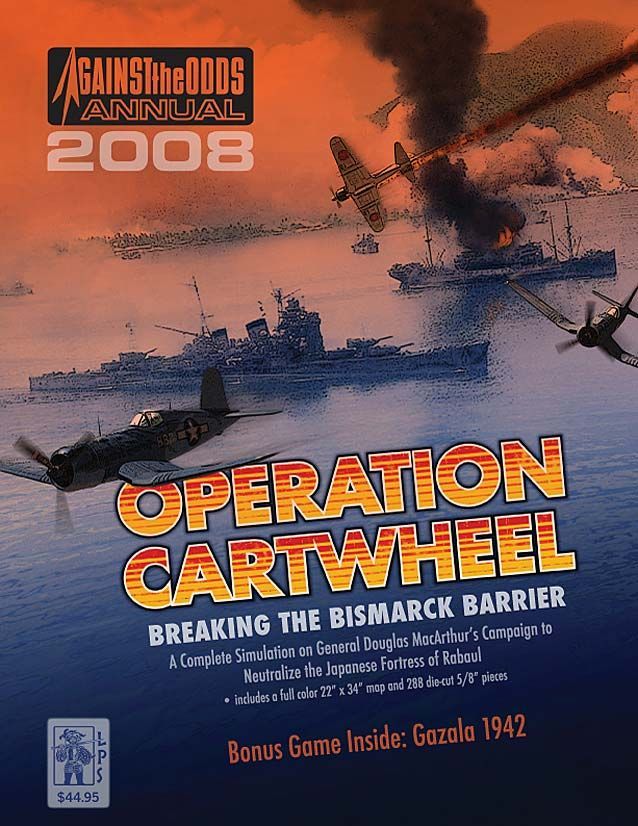 (from ATO website) Operation Cartwheel was a miniaturized version of Allied Grand Strategy in the Pacific—a multi-pronged advance aimed to make it difficult for the Japanese to focus their responses... a jumping from air base to potential-next-airbase. (MacArthur called it, “Advancing the bomber line.”) And, most of all, the novel concept that not every Japanese stronghold needed to be attacked at all. Some 13 different invasions or operations were included, with flexibility for adjusting both timing and target as the situation demanded. In fact, the original goal of Cartwheel (called “Elkton” when first proposed) was the capture of Rabaul. After much discussion in the highest levels (including the Combined Chiefs of Staff, Roosevelt, and Churchill), and overruling MacCarther’s own objections, Cartwheel’s final objectives shifted to the Admiralty Islands, bypassing Rabaul and setting the stage for the invasion of the Philippines. Operation Cartwheel eventually included the Battle of the Bismarck Sea, the death of Yamamoto, Bougainville, multiple parachute drops, a Japanese counter-invasion, and the leap-frogging strategy up New Guinea. It involved the top commanders on both sides, sometimes working in close harmony and sometimes at ends. (The Japanese army and navy had conflicting concepts of how to defend the area and each pursued their own ideas!) With 284 5/8" counters and a 22 x 34 inch map (each hex representing about 100 miles) Operation Cartwheel integrates separate ground, naval, and air games. Logistics is key, as it was at the time, but not a burden in game mechanics. Operation Cartwheel will be published in ATO's 2008 Annual, featuring a “double-length” magazine, with an in-depth look at the history behind the game, plus other articles, and an assortment of replacement/improvement counters from that year’s games.[...] Maps - One full color 22"x34" mapsheet Counters - 284 full color die-cut 5/8" pieces Rulebook length - 16 pages Charts & tables - 4 pages Complexity - Medium Solitaire Suitability - Average Playing Time - 2 to 3 hours for the smaller scenarios, up to 12 to 15 hours for the full campaign game