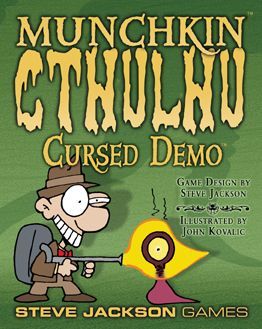 Publisher's Description This tuckbox mini-set contains 56 cards to help you bring new victims . . . errr, gamers . . . into the wonderful world of Munchkin Cthulhu . . . First, a special 17-card demonstration deck, drawn from the Munchkin Cthulhu set. The cards are numbered, so you can stack the deck and play out four scripted turns that show the basic mechanics. And it only takes a couple of minutes. Instructions, dialogue, and stupid jokes are included. Or use your own stupid jokes - we won't mind. The other 39 cards are promos, to give away to friends, customers, or total strangers. These are completely new cards, each guaranteed to be more munchkinly, more insane, more cursed than the last. And we've included multiple copies. Every munchkin will want at least one of each. Will you be generous? Or will you demand tribute? Of course, you are a munchkin, so you will keep at least one of each for yourself, right? Other Part of the Munchkin series Caution If you have no experience with playing Munchkin-games this will NOT help you learn the game! It's meant to teach OTHER players how to play the game and it's NOT meant to be used as a demo for a totally new group of players since there are close to no rules explained. Promo Cards The 39 promo cards are as follows: (5x) Curse! Shuggoth Shuffle (Door) (4x) Embrace the Madness (Door) (4x) Miskatonic University Honorary Degree (Treasure) (5x) Mi-Go Mind Switch (Promo) (4x) Monstrous Heritage (Door) (4x) Research Assistant (Door) (8x) The Stars are Cruel (Promo) (5x) Trade Character Sheets (Promo) This set introduces a new card type that has the word "Promo" on the back with the picture from the front of the Munchkin Cthulhu box. These cards are not shuffled into the deck; instead, at the start of the game, the owner of the "Promo" cards may choose one of them to place on the table and play when desired. (Each player can play one Promo card per game.)