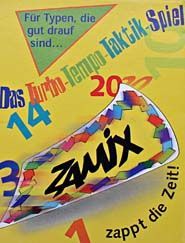 This game contains 80 cards, numbered from 1 to 20 and with numbers 10 showing the text “Take an action card” and 10 Action Cards. To play players take one numbered card and place it in front of them, in case there is a 1 it is placed in the middle of the table. From there, players can place their card ascending in the middle stack or ascending or descending in the stacks of the rest of players. Every time a card is placed, players must take a new one. Action cards are used only when the 10 cards can’t be situated anywhere. Also if someone sees a mistake shouts ZAMIX and gives another card to that player. When there aren’t more new cards to take, players put the card they have in their hand in the table as the ending stack and turn the stack they had in front of them. The one who is able to spend all the cards from his own stack wins the game.