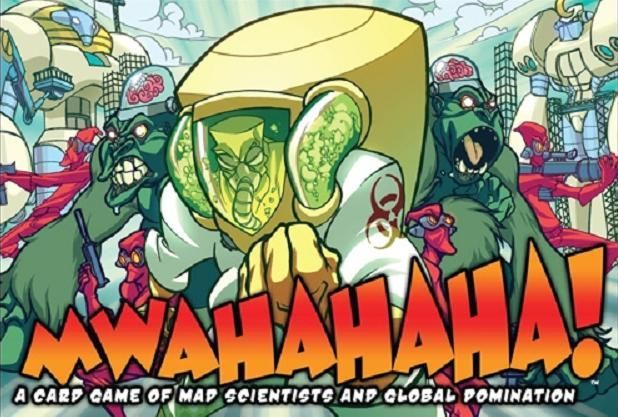 Mwahahaha! is a resource management card game of Mad Scientists and Global Domination for 2-5 players. You assume the role of an evil genius who builds a criminal empire and constructs a doomsday device with which to cow a trembling humanity. But you're not the only one with grand machinations. Other players rival you for absolute mastery. He who completes his device first and collects the highest ransom is declared the winner — and ruler of the world! Players choose the doomsday device that they intend to build - keeping it hidden from their opponents until they are ready to unleash it on an unsuspecting humanity. They build up the resources needed to activate the machine by playing and drawing cards whilst using minion cards to steal resources from other players and protect their own. Once a player's device is ready they can threaten a city with it. If the city surrenders the player will gain resources towards building the next stage of their machine. If the city refuses to surrender then the player has to choose the humiliation of backing down or to activate the machine - thus destroying it. Each stage of the machine has a grander target, the winner is the player who forces the whole world to surrender.