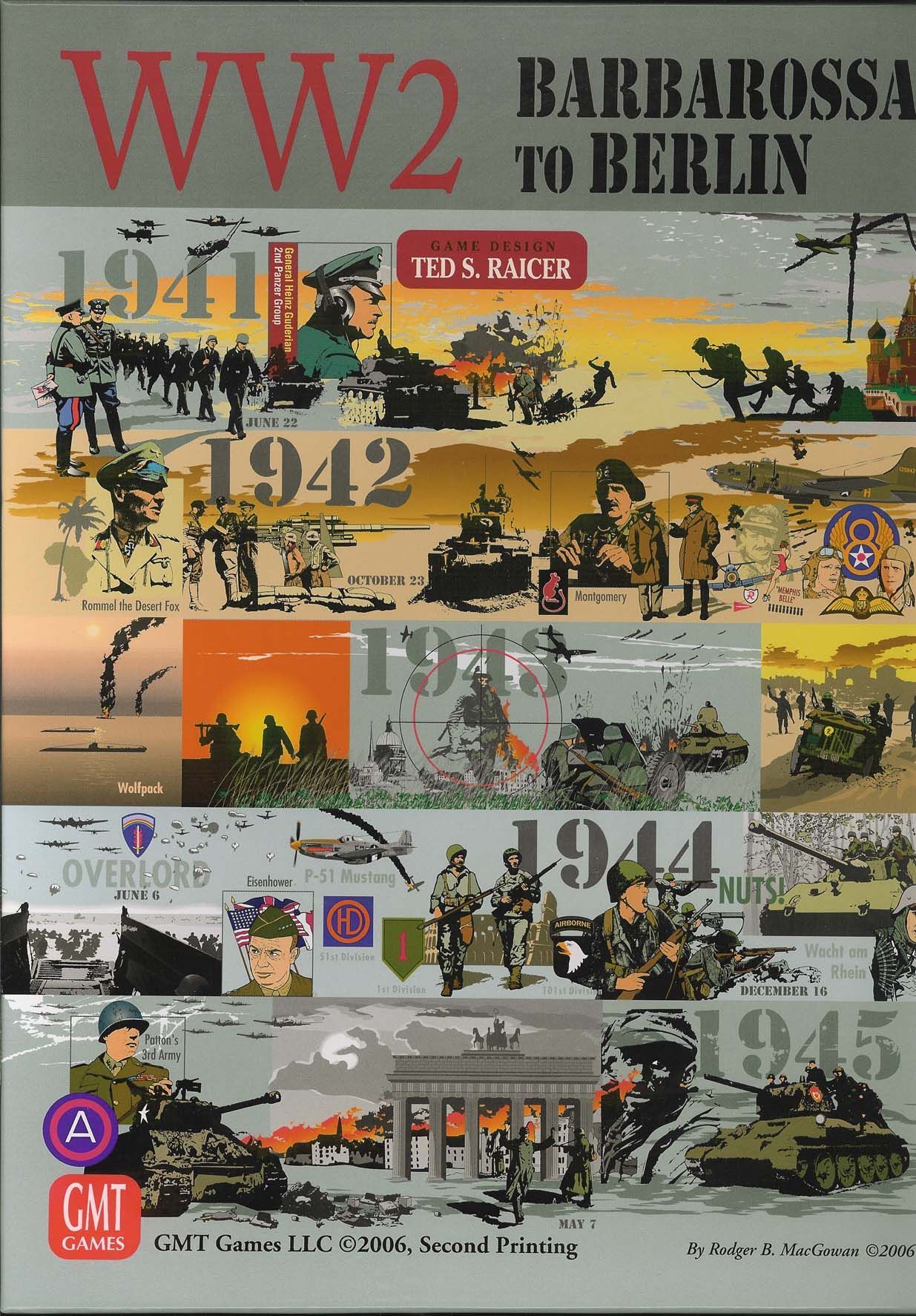 (from GMT Games:) Spring 1941: Nazi Germany is triumphant. Poland has long since vanished from the map. Denmark, Norway, and the Low Countries have been overrun. France, the victor of 1918, has fallen. Greece and Yugoslavia have now been crushed. Britain stands alone, freed from the threat of invasion by the courage and skill of its air force and navy. But Britain is stalked and assaulted by the Nazi wolfpacks, and in North Africa a mixed garrison of British and Commonwealth forces is besieged in Tobruk by Rommel and his Afrika Korps. Then, on June 22, Hitler launches Operation Barbarossa, the invasion of Stalin's Soviet Union. As the panzer spearheads slice through the bewildered Russian defenders, it appears that nothing can halt the Nazi tide. But the course of History has just taken a major turn. The Last European War is over; World War II has begun. It will end four years later, in a bunker in the ruins of Berlin. World War II: Barbarossa to Berlin covers those four years of epic struggle, from Moscow to Stalingrad, from Tobruk to Tunis, from Sicily to Rome, from D-Day to the Rhine, to the final battles for the Reich. Designed by Ted Raicer as a follow-up to his award-winning WWI strategic game, Paths of Glory, World War II: Barbarossa to Berlin modifies the Paths of Glory systems to capture the strategic and operational dynamics of WWII in Europe. As in Paths of Glory, World War II: Barbarossa to Berlin uses a point to point map, this time covering all of Europe from France to the Urals, and from Norway to North Africa. Units are armies and corps (fronts and armies for the Soviets), and each turn represents three months. The movement and combat systems will be familiar to Paths of Glory players, but have been modified to recreate the blitzkrieg campaigns of 1941-45. As in Paths of Glory, the heart of the game lies in the 110 Action Cards (55 each for the Axis and Allied players). Each card can be used for operational movement and combat, strategic movement, replacements, or for an Event. Events include: Individual leaders (Patton, Guderian, or Rommel the Desert Fox) Tactical innovations and new weapons (Fortified boxes, Tiger tanks) Strategic Warfare (U-boats, Bomber Command, the 8th Airforce) Reinforcements (Soviet Mechanized Fronts, PanzerArmee Afrika, Patton's Third Army) Allied Invasions, actual or potential (Torch, Sledgehammer, Husky, Overlord) Politics and Diplomacy (Hitler Declares War, Casablanca, Yalta, Operation Axis) Irregular Warfare (Partisans, the Maquis, Otto Skorzeny) World War II: Barbarossa to Berlin presents both the Allied and Axis players with a wide range of exciting game choices, while illustrating the key historical factors of the war; from the importance of mechanized forces in combat to the importance of oil to fuel them, but without the complexity of other strategic WWII designs. And unlike many of those games, World War II: Barbarossa to Berlin lives up to its title: an Axis player who fails to win the war may still win the game. The winner is often decided on the last turn as the Allied player struggles to extinguish the last traces of the Nazi empire. It is June 22, 1941: Will WWII end in German triumph in Barbarossa or collapse in Berlin? As the world holds its breath, the decisions are yours.