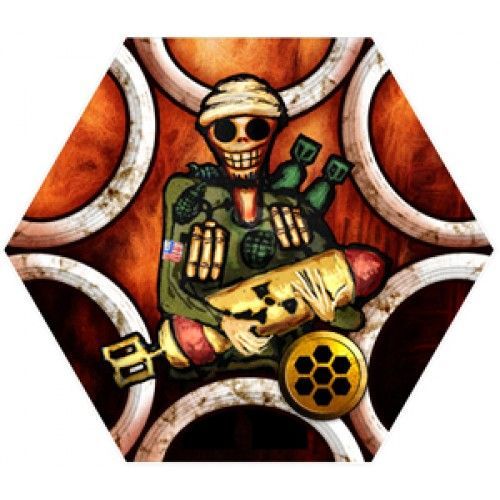 The Mad Bomber is a single tile supplement for Neuroshima Hex! 3.0. It was given away, with rules only in Polish, to participants at a Neuroshima Hex tournament during the game convention Pionek in Gliwice, Poland 2007-12-08. The Mad Bomber is a single unit which belongs to no player nor army. He starts the game on the center of the map. If he receives any damage during a battle, he immediately explodes in the same phase, causing a point of damage to units in all 6 neighboring hexes (except headquarters). He then will be drawn as the first tile by the next player in turn order after the one who caused the bomber to be hit, and that player can deploy him on the map again. If more than one player hits him in the same initiative phase of the battle, then he is knocked out of the game. The Mad Bomber II works slightly differently: he starts the game off the board. Either player can then, by discarding a tile in addition to their usual discard, place the Bomber anywhere on the board. Once he is eliminated, he may then be placed again by either player, as previously detailed. Expands: Neuroshima Hex! 3.0