World at War: Death of the 1st Panzer - Universal Statistics 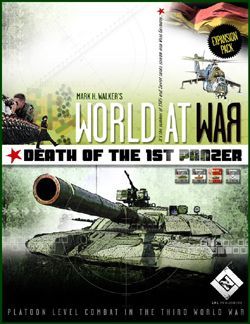 Expand your World at War battles! The initial Soviet forces have taken heavy losses, but NATO has discovered that the Soviets can give as good as they get. The smoking remnants of an American armored brigade dot the hills of the Eisenbach Gap, and still the Soviet attack continues. Now it is the hastily assembled 1st Panzer Division’s turn to stop the red horde. Will the West German’s mix of Leopard I tanks, Marder Infantry Fighting Vehicles, and tank destroyers, coupled with a handful of lethal Leopard II tanks, be enough to stop the Soviet onslaught? It’s up to you to find out. Expands: World at War: Eisenbach Gap Expanded by: World at War: Gamer's Guide World at War Compendium Reimplemented in Eisenbach Gap Deluxe with a new printing of the board and counters.