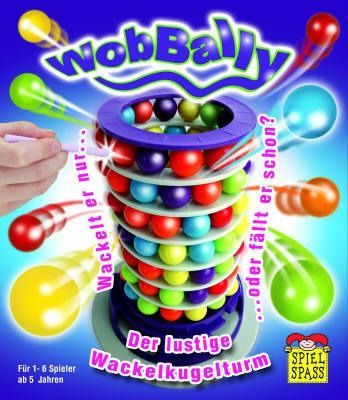 WobBally is three games in one and consists of a Tower of 98 very unstable balls. Test your skills and patience by tapping the balls into the Tower one by one! The player who causes the Tower to collapse is out of the game. The tower is a series of layers of plastic balls, separated by ring plates. The tower is protected by a clear plastic cylinder with an indicator built into the top to show when the tower has been placed on a level surface. The protecting cylinder is removed and the whole thing becomes distinctly unstable. The centre of the tower is hollow and sticks provided are used to tap balls from the tower ring into the centre well, where they fall to the bottom and roll out of an aperture in the base. Roll the dice to see what color ball you have to knock out, and from what level. Using the cue stick, carefully try to remove it - but watch out! The player who makes the WobBally tower collapse is out of the game! Dramatic sways and increasing instability keeps the suspense and action growing. The winner is the last player left after all the other players have made the balls spill. The rules give 3 ways to play. Can be played solitaire.