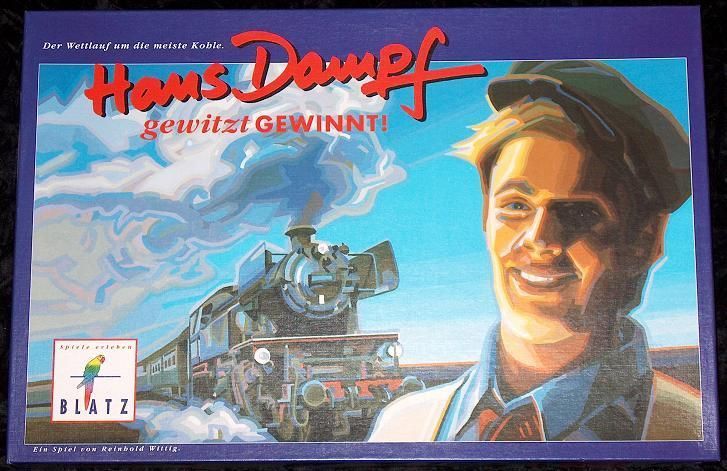 This is a steam engine race for up eight players. The board has a spiral shaped track leading to the middle, then back to the edge. Each player receives an engine. The active player rolls a die (numbered 3,4,5,5,6,6) and moves the corresponding number of fields forward in a straight line. The engine may be turned by 90 degrees at the end of the move. If s/he doesn't want to use up all the die's points, s/he can decide to go slower. For that, s/he gets the difference in coal coins, but must distribute them in any way among the other players (who may beg, bribe or threaten the active player). Passing another engine costs one coal, passing an engine going in the opposite direction (with more than four players, the starting positions are on both ends of the track) costs 2 coals, and getting rid of an obstacle piece and placing it anywhere else on the track costs 4 coals. For crossing the finish lines, the players may pay any number of coals and add that number to their final die roll; they can also do one turn within their turn - but only if they can actually cross the line. The first player to do so, wins. In case of a tie, the remaining coal is the tiebreaker.