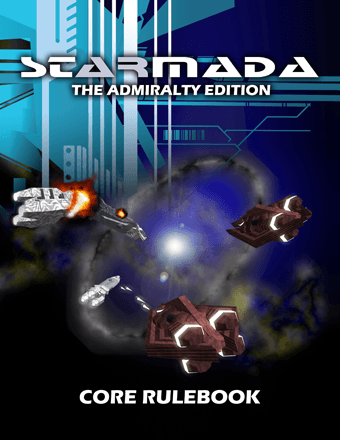 Starmada is a board game of starship combat. At its most basic level, players take command of space fleets in a general attempt to reduce each other to just so much space junk. At its most advanced, the game can be customized to breathe life into any science fiction background that players might imagine. Novices shouldn’t fret; the core set of rules has been designed with simplicity and ease of play in mind, accessible even to beginners. On the other hand, seasoned veterans should find the concise nature of the rules quite refreshing. It allows players to concentrate on the finer points of squashing their opponents rather than arguing about rules interpretations, without sacrificing any of the flavor or excitement of more complex games. Simple, but not simplistic, is the guiding principle. The Admiralty Edition represents the latest incarnation of the Universal Game of Starship Combat. Included in the 80-page Core Rulebook: The "essential" Starmada rules, including a new inertia-based movement system. Over 80 different options from which players may pick and choose to create the perfect game. A fully-customizable weapon design system, with almost five million different combinations. A complete set of rules for fighters, allowing for nearly half a million different types of small craft. A comprehensive construction system, allowing players to design their own starships with which to do battle. In addition to the core rulebook and 48-page Starmada Universe guide, a number of different settings are planned for the near future, including collaborations with several other companies. Available both in Print and PDF print-n-Play. Expanded by: Imperial Starmada Sourcebook Starmada: Dreadnoughts Starmada: Hammer and Claw Starmada: Iron Stars Starmada: The Admiralty Edition â€“ Rules Annex Integrates with: Klingon Armada Romulan Armada Later editions: Starmada Nova Rulebook