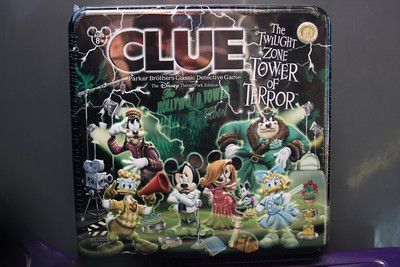 The Twilight Zone Tower of Terror Clue is the second tin boxed Disney Theme Park Editions based on Clue. They are only sold at Disney resorts and theme parks. Unlike its Haunted Mansion predecessor, this one re-designs the rooms with fewer mansion doors and a new story line based on The Twilight Zone Tower of Terror theme park ride. While filming a movie, lightning strikes the building and one of the cast/crew disappears. Your goal is to figure out who is missing, with which movie prop and what room they disappeared from.