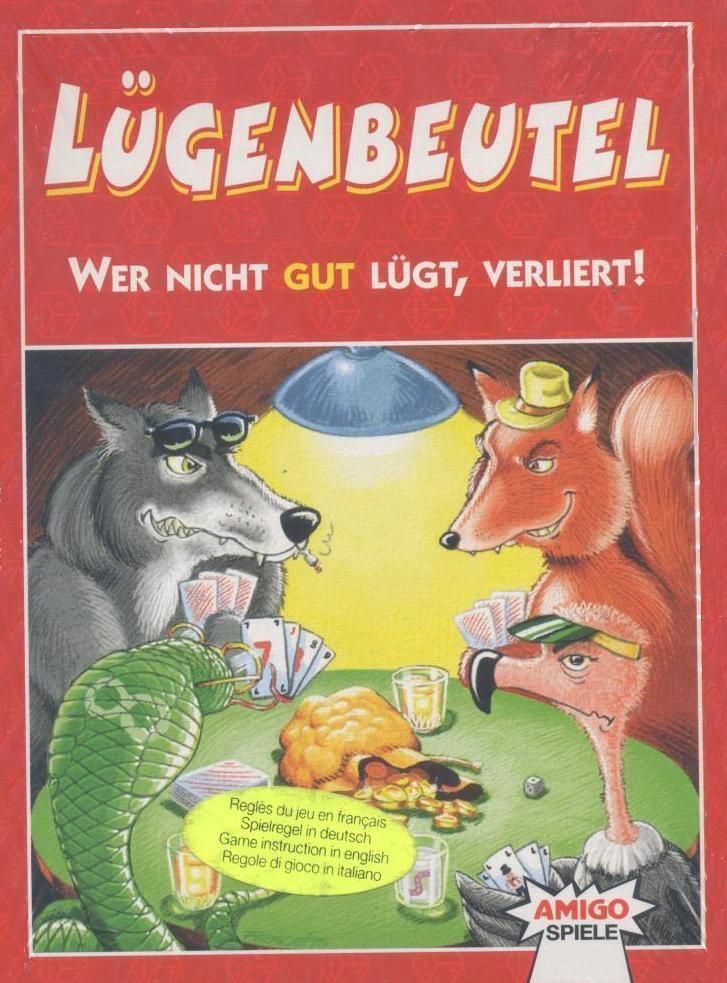 Sack of Lies, a card game for liars, the box cover shows a wolf, fox, vulture and cobra competing for the pot! You must clear your hand of 10 cards, by placing successive cards face down on the deck, bluffing as necessary. So the deck is started by a player laying 1s, the next player lays 2s, one by one and so on. At some point, your bluff is called. If you were false, draw more cards. If you were true, your opponent draws. There are action cards, including a sack of lies which has no value and so you must lie when playing it. Playing Scheinheilig your goal is to get rid of the cards in your hand. In total, there are 70 cards numbered evenly from 1 to 10, 26 Angels (Jokers), 8 Devils (don´t want those) and 8 "skip a turn"-cards. Every player starts the game with 10 cards and play proceeds clockwise. The youngest player starts and has to discard cards with the number "1" face down. At least he has to pretend to discarded 1´s. A player can put down any number of cards. The next player can then either accept whatever was just discarded and discard 2´s on his own or he can question one of the cards just discarded and turn it face up. If he was right and card does not show the correct number, the player who tried to discard a wrong card has to take back the questioned card and all cards on top of it. On top of that he has to roll the die and draw that many cards from the deck. If the questioned card had the correct number, the questioning player has to roll the die and draw that many cards. Angels are always considered the correct number, Devils never. Whenever it is your turn, you can also just draw a card and end your turn. Whoever gets rid of all cards first, wins.